The immune system recognizes both self and non-self-entities. When non-self agents are recognized, like nanoparticles, immune cells decide whether they constitute a danger or not. If the body recognizes non-self and considers it dangerous, the immune system responds with inflammation. In the case of pathogens which induce disease, they are confined to a local site, are destroyed, and if an injury has occurred, wound healing is induced. Some technically produced nanomaterials are suspected to promote inflammation. However, an ability to influence immune responses can be medically useful. Research about the safety of nanomaterials can thus also contribute to the development of novel medical therapies.

Humans have two defensive systems, which cooperate closely: An innate and an adaptive immune system.

The innate immune system is genetically programmed and is identical in all humans. It is stimulated via a wide range of specific binding structures which recognize two different kinds of stimuli. The first type of stimuli includes compounds that exist only in bacteria, viruses, fungi or parasites, so they indicate that other organisms have invaded the body. An example is Lipopolysaccharide (LPS), a molecule from bacterial cell membranes that is produced exclusively by bacteria, which allows us to recognize that bacteria are present. It would be disastrous for the body to react to this stimulus automatically with inflammation: Our body surfaces are constantly in contact with bacteria, which are nearly all harmless. Within our gut we have a huge amount of bacteria that are urgently needed there to contribute to digestion. An immune reaction occurs only if other specific binding structures are stimulated that recognize signals indicating danger. Danger signals are substances occurring inside of cells, which are released upon sudden cell death (Necrosis). 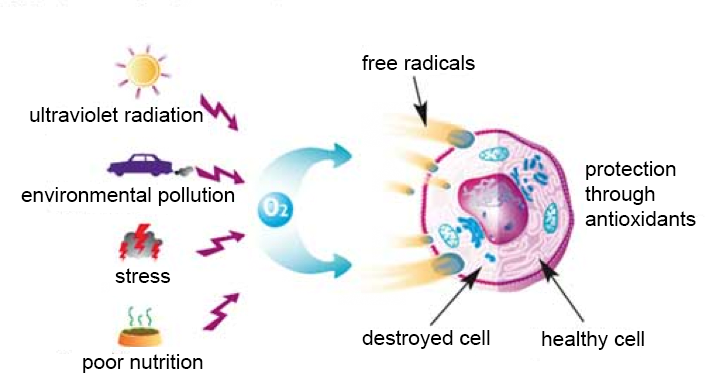 Nanomaterials can sometimes directly activate binding structures that recognize stimuli for innate immunity, since particles may bind to them. Another source of danger that is recognized by cells are toxic metal ions released from metal or metal oxide particles. Furthermore, Reactive Oxygen Species (ROS) can be produced on the surface of some chemically active particles, but also by immune cells during chronic inflammation, which provides a stimulus that alerts and activates the immune system [1].

Research in this field has to deal with the problem that bacterial molecules like the LPS mentioned above occur practically everywhere and are frequently found as contaminants of nanomaterials. Some reports about pro-inflammatory properties of nanoparticles in the older literature are likely to be due to such contaminants or to the application of unrealistically high amounts of nanoparticles [2].

However, it is clear that some types of nanoparticles can indeed promote inflammation. This may be useful for antibiotics or in the therapy of cancers, but for use in normal consumer products such properties are problematic.

Besides of the innate program that initiates inflammation, we also have the adaptive immune system, which earns its name since it adapts to recognize a nearly unlimited number of different stimuli. Cells from this system “learn” how structures from invading pathogens look like and remember it throughout life – that is the reason why vaccinations are effective. It is unlikely that nanoparticles are directly recognized by this system. However, binding of proteins to particles may be a problem. As soon as particles enter the body, proteins attach to their surface, so we are in fact exposed to nanoparticles/protein complexes [3]. Since the structure of proteins can be changed upon binding to the particle, it is possible that self proteins could be considered as non-self, which may stimulate defensive mechanisms from the adaptive immune system. It is not clear whether this actually occurs, but this field is under intense investigation. An effect on adaptive immunity would have to be considered in assessing the safety of nanomaterials.

The ability of nanomaterials to activate or modulate the immune system can be exploited for medical use. The right combination with nanomaterials (like gold) can allow to produce for example particularly effective vaccines.