An answer to this question can be illustrated by the example of nanoparticles, and similarly applies to other innovative materials and their related products when they are released in a critical shape and size. If particles (nano- or microsized) are released from products the exposure to such particles is possible for people and the environment and they may be taken up by organisms and adverse effects may occur. Consequently, particles cause no effects when they are not released. Nevertheless, during the lifetime of smart materials particles can be set free by various processes during e. g. production, application or after use. 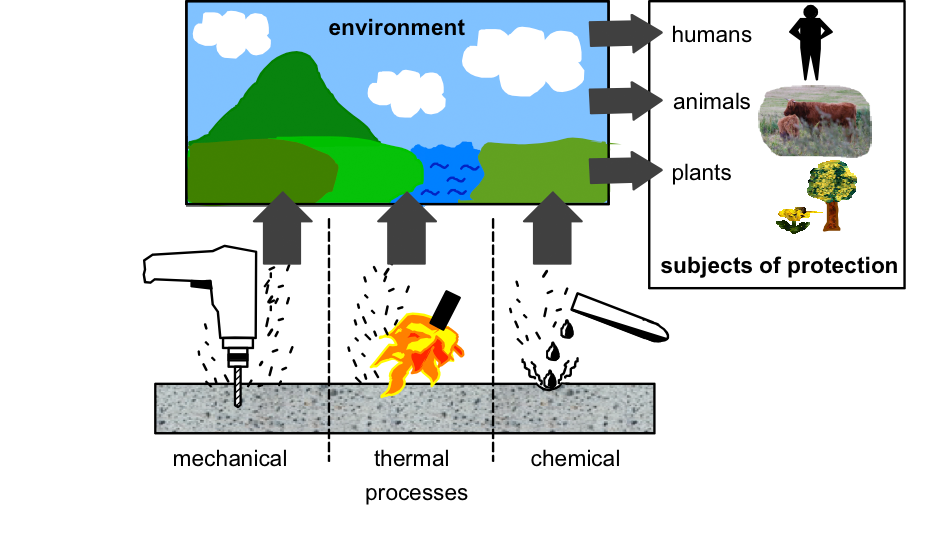 The different processes of release can apply alone or in combination with each other. For example, grinding of a composite material with embedded nanoparticles can lead to the nanoparticle release by mechanical abrasion and additionally by the heat produced by the grinding.

The particles released by such processes from the original material are often not individual nanoparticles. They normally enter the environment linked to other particles (as agglomerates or aggregates) or embedded in the matrix material (e.g., fragments of plastics).

The released particles including nanoparticles can be transported in the environment. The transport to a subject of protection like humans, animals or plants varies strongly in distance and time. During the transport, the particles can undergo changes (decomposition, changes of the surface, separation of agglomerated nanoparticles, ….). The multiplicity of the influencing factors during the transport can lead to different exposures of the environment, the worker, the consumer, and the general population by the same released material. Therefore, each release scenario must be considered in detail and assessed individually currently.