> Basics >Basic Information > How do you get in contact with innovative materials (e.g. nanomaterials)?

Certain innovative materials are expected to conquer future markets due to their outstanding properties. The considerable increase in production and the increased use of products that contain materials like that may result in a higher exposure of humans and of the environment. For humans, this may be of relevance to workplaces during production and may play a role when such materials are used or are disposed of. Protective measures or preventive examinations are always part of occupational health and safety and of product safety measures.

A release of innovative materials such as engineered nanoparticles into the environment may occur during the production process, during the usage of products or as waste. Released particles can get into the air, into water bodies as well as into the soil. 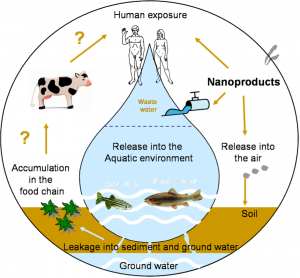 Flowchart of the environmental distribution of nanomaterials (Compilation © DK)

Besides plants, which get into contact with particles via soil and water over their roots or via the air over their leaves, one also has to consider many microorganisms such as bacteria or fungi. The latter have important functions within the ecosystem and can be exposed to particles via soil, air and water. After all, several organisms such as worms in soil or water organisms are exposed only via one environmental compartment. For all the other organisms, such as for humans, the air is the most important route of entry. In this context it is important to differentiate between engineered and natural occurring particles, the latter arising from combustion processes (volcanoes, forest fires) or the weathering of rock by wind and rain. These particles represent natural components of our environment and humans, animals and plants are adopted to an exposure for a long time.

Engineered nanoparticles, however, are an altogether novel challenge. It is difficult to measure (analyse) these really tiny particles. The instruments required are very expensive and are not yet even able to measure accurately anywhere in the environment. Therefore, different projects funded by the Federal Government and the European Union have been dedicated to the development of methods and instruments that allow a reliable and exact measurement of nanoparticles in workplaces or in the environment.