Nanomaterials represent important new options for the treament of a variety of diseases. In medicine nanomaterials already are employed for various drugs, diagnostics, and implants. Presently, intense reseach is performed to explore further opportunities for using nanomaterials in the health sector, making nanomedicine an area that – including the public – receives strong attention What really is available right now and which new agents may become available in the foreseeable future? And how prudent should we be in order to prevent disappointments caused by exaggerated expectations?

Nanoparticles have an extended history in medicine. Long before the term „nanotechnology” was coined, colloidal gold (which today is called nanogold) was used for rheumatoid arthritis [1]. Nano-sized silver particles have been applied for a long time especially in dermatology as antibacterial agents (for example in wound dressings) [2].

With the development of nanotechnology, it became an interesting concept to also exploit the specific properties of nanoparticles for medical purposes. Two aspectes are important: Firstly, the pharmaceutical agent has to contain particles in the nano-size range, and secondly, certain useful properties that cannot be achieved either with larger particles or with chemical compounds in dissolved form have to be attained.

A summary published in 2013 counted exactly 100 products, described as nanopharmaceuticals, that are clinically approved and on the market, including medical devices such as implants or surgical instruments [3]. In the case of implants, for example, nanostructured surfaces made of titania can promote wound healing and suppress inflammation [4]. So far, 43 products have been approved as nano-drugs (counted in 2014, e.g. influenca vaccines, anticancer drugs and drugs against fungal infections) [5]. The largest share of approved nanodrugs is intended for tumour therapy, but overall a wide range of applications is covered, including infectious diseases, pain treatment, diagnostic use, vaccines, autoimmune diseases, and immunosuppression required for organ transplants.

Why is nanomedicine being used? 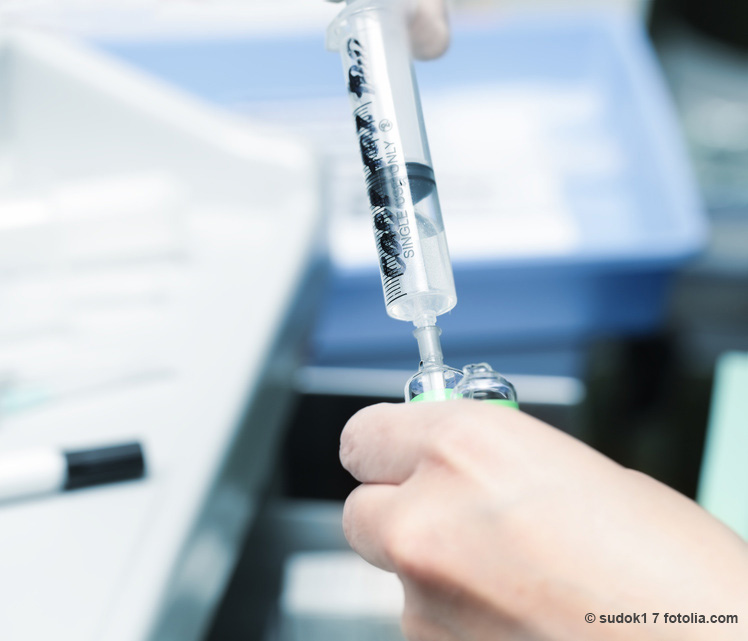 An essential aspect of nanomedicine is the size of the particles, which can importantly improve permeation into tissues, in particular into tumours, where the integrity of the tissue is disturbed. If anti-cancer drugs are transported by this way into a tumour, the locally available dose can become very high. This effect is already exploited in a number of nanopharmaceuticals. Other particles aim for preferential uptake by specific cells. This effect is important for example in the case of vaccines, which have to be taken up by certain cells of the immune system to be effective. There also are hopes to exploit the ability of some nanoparticles to penetrate body barriers. In the lung for instance, particles could travel directly into the blood, which means that medications could be inhaled instead of being injected. Another interesting target is the blood-brain barrier, which successfully protects the brain from exposure to most pathogens, but unfortunately also from medical drugs that should
reach that organ.

It is usually difficult for nanoparticles to penetrate body barrieres in higher amounts. This is positive for safety, but for medical applications, researchers are working intensely to enhance this process. For diseases like Alzheimer’s a drug must reach the brain, a challenge for which there is hope that nanomedicine eventually may contibute to solve it. While this type of application still is in the stage of basic research and has not even reached clinical tests, nanoparticles containing iron already are in use for some types of brain tumours. However, they need to be surgically delivered into the tumour with a fine syringe. Also based on iron, but aiming at a totally different application, another drug is used for better visualisation of the gut, where it helps to improve the diagnosis of different diseases. An interesting concept is that such diagnostic particles in parallel could contain drugs. This would lead to „theranostics”, where particles are used simultaneously for diagnosis and for therapy.

However, nanodrugs are not miracle cures. If established drugs are combined with nanoparticles as carriers, they not necessarily are better than the drug itself [6]. The particles also may fail to deliver sufficient amounts of a drug to the disease site, or that they may be cleared too quickly from circulation, which is carried out mainly by the liver [7,8]. It has also to be considered that the same applies for nanopharmaceuticals as for other pharmaceuticals: They have to pass a very strict and time-consuming approval process with the agencies in charge of drug safety. In Germany, this is the Federal Institute for Drugs and Medical Devices (BfArM), which acts as independent federal agency within the remit of the Ministry of Health. For the EU, the European Medicines Agency (EMA) has the same function. It takes about 10 years for a product to pass from it’s discovery to It’s approval as a commercial drug. For nanopharmaceuticals this process may take even longer, if indeed new principles are exploited that need to be specifically examined. It is thus not likely that nanomedicine will rapidly revolutionise medicine. On the other hand nanotechnology creates genuinely new options for medical treatments, which only can be achieved using nanomaterials.