In mammals the olfactory mucous membrane is located in the upper part of the nose, called the nasal roof. In this area the inhaled air passes by free nerve endings that are able to sense various molecules in the air, thus functions our sense of smell. Randomly molecules and particles may have contact with these nerves, and by this means directly reach the olfactory bulb, which is connected to our forebrain. This pathway guides into the brain without the necessity of crossing the blood-brain-barrier.

The nose is located at the very top of our respiratory tract. It has various tasks: When it’s cold outside the breath is warmed up, large particles can be filtered here by small hairs and the inhaled air will be humidified, thus, our lungs will not be overloaded with pollutants or become dried out. Air contains a large number of various molecules, dust particles as well as biological residues (pollen, bacteria, viruses, plant fibres etc.). Besides essential gas molecules such as oxygen, many other constituents reach our respiratory tract and the lungs. In the deeper lung, they reach the air-blood-barrier and may be able to penetrate into our body. 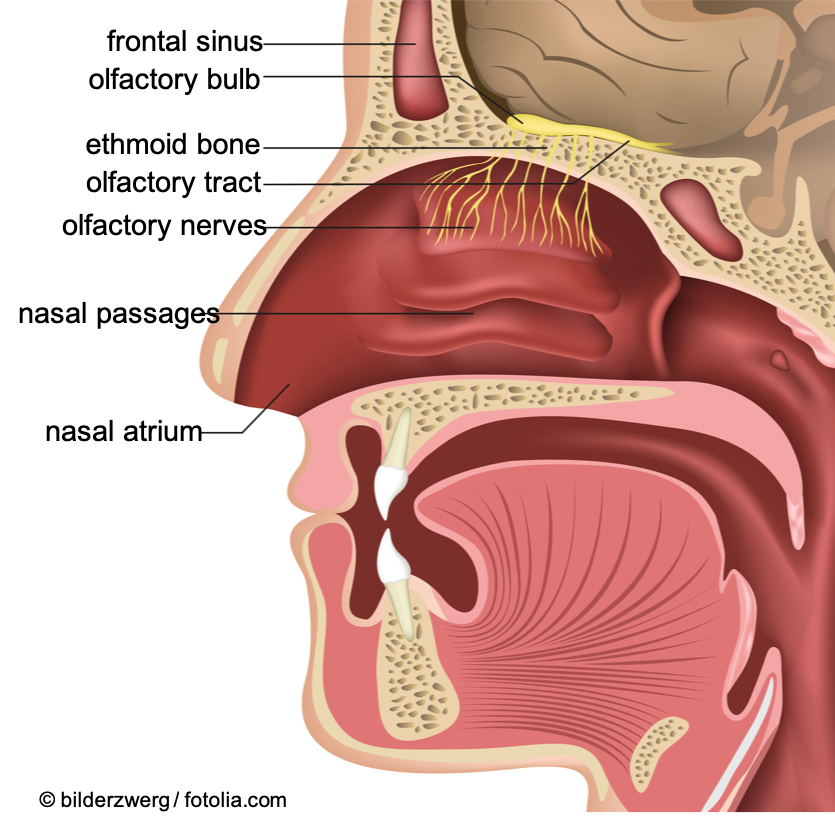 The olfactory mucous membrane – the shortcut to the brain

At the very beginning of the breathing process molecules and particles get in contact with our olfactory system in the uppermost part of our respiratory tract, a small area of about 5 cm2 within the nasal roof that contains about 5 million olfactory nerve cells (in comparison: in dogs this area has a size of about 150 cm2 with 125 to 220 million olfactory nerve cells). Gas molecules or other substances can bind to these free nerve endings and induce specific signal transmissions. The mixture of all such stimuli is our sense of smell. Human beings are not very sensitive to odours because of their relatively low number of nasal nerves, but nevertheless are able to discriminate between pleasant and repulsive smells, which often has been important for survival. The olfactory nerves are relatively long cells with free endings to the airstream. The other end is located within the olfactory bulb above the bones of the nasal roof. The olfactory bulb is directly connected to the forebrain and guides the signals from the olfactory nerves to the forebrain, where all signals are interpreted and translated into sensory perception or impressions. The very special anatomy in this area enables the easy transportation of molecules or particles taken up by the nerve cells directly into the forebrain without a detour via penetrating the blood-brain barrier. This shortcut into the forebrain is a certain risk if environment related pollutants are taken up via the inhaled air.

Environmental pollution and the nose

The knowledge about the link between environmental pollution with fine dust particles and the contamination with such pollutants in the forebrain increased very strongly in the last 20 years. The first studies were done in the 90s of the last century in Mexico City, a megacity with very high air pollution. Humans and animals were there exposed to 70 up to 270 µg/m3 of fine dust particles all day for 24 hours, an amount far above the European threshold value for the yearly mean of 50 µg/m3[1]. Lilian Calderon-Garciduenas, a Mexican scientist, and her team have investigated dogs and children who lived in the streets of Mexico City [2-8]. Her team examined not only the lower respiratory tract but also tissue from the nose and nerve cells of the olfactory mucous membrane taken from accident victims (dogs and children who spend their whole lives in downtown Mexico City [6-8]). These studies elucidated a direct connection between the environmental pollution and adverse effects within the respiratory tract mostly consisting of inflammatory responses. Moreover, they found the same particles in the olfactory bulb and the forebrain as were present in the polluted air.

However, in order to preclude any premature conclusions, at present caution should be taken when evaluating particles as well as nanoparticles in the air. Firstly, the air in Mexico City is not only polluted with fine and ultrafine dust particles but also contains many other pollutants such as gases (ozone, NOx etc.) and various chemical substances which as well may damage the epithelial tissue [9]. Thus, the particle burden in the forebrain may not only be the result of the exposure to the particles themselves but may also be due to the damage of the epithelial structures by other pollutants. Such damage eases the uptake and transport of the particles. In summary, these results lead to the conclusion that constant environmental pollution in the air induces tissue damage in all parts of the respiratory tract and thus enhances the particle uptake in the upper airways into the olfactory bulb and the forebrain.

Nanoparticles and the olfactory bulb

The studies of Lilian Calderon-Garciduenas as well as a number of studies by other scientists all across the world induced further considerations of environmental effects on organisms. In 2002 several publications reported a direct transport into the forebrain of small particles consisting of manganese phosphate [10] or carbon black [11]. These particles were radioactively labeled to easily detect them within the organs and tissues. It seems that this direct transport is not size-dependent since micrometer-sized particles (manganese phosphate) as well as nanometer-sized particles (carbon black) could be found after inhalation within the olfactory mucous membrane, the nerve cells, and the olfactory bulb. A recent study with radioactively labeled iridium particles clearly demonstrated the difference between two possible uptake scenarios [12]. Whereas the experimental direct inhalation into the deeper lung induced no significant transport into the brain (only very few particles could be found in the brain that at first penetrated the air-blood-barrier and then the blood-brain-barrier after transport by the blood stream), nasal breathing resulted in a much higher uptake of particles by the brain. Consequently, the transport via the olfactory mucous membrane is a factor that should not be underestimated.

Nevertheless, the overall number of particles crossing the olfactory barrier is very small in an environment with low air pollution. However, there is a clear requirement to mitigate the particle concentration of the air in high-exposure scenarios.

Studies clearly demonstrate a possibility for molecules and particles to be transported into the forebrain via the olfactory mucous membrane. However, in order to induce adverse effects within the tissue and the forebrain, the exposure must be very high and must last over a prolonged period of time. The European regulatory bodies have considered this in the current regulations and have defined the recent threshold values for air pollutants and fine dust particles.