There are millions of workplaces with a substantial dust burden not only in Germany. As dust affects the lung and has negative effects on the health of workers, specific occupational exposure limits are defined, which are adapted permanently to actual research results. It is simply the dust particles, so-called GBP, and they must not contain toxic substances. The lung burden with granular biopersistent dust particles is enough to induce biological effects if high concentrations are inhaled or a chronic exposure takes place. The term “biopersistent” describes particles, which are not dissolved or cannot be degraded within the body. 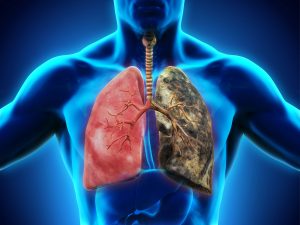 Very roughly the dust in the air can be divided into two categories: the inhalable fraction and the respirable fraction. The latter one is the fraction reaching the terminal endings of the bronchioles down to the alveoli, where the gas exchange between air and blood takes place. The main descriptor of particles reaching this part of the lung is size, as larger particles up to 10 µm are inhalable as well but remain in the upper airways and will be transported out of the lung with the mucus in a short period of time (hours). The smaller the particles are (< 3 µm down to less than 100 m) the deeper they penetrate the lung. If they were deposited within the alveoli, the clearance from the lung takes much longer. Here they have to be found and “eaten” by the alveolar macrophages; the cleaning cells of the deep lung, which transport the foreign materials out of the lung (see also Nanoparticles and the Lung). This process usually takes days, weeks or months, dependent on the overall burden of the lung. The most important property of such GBP particles is their persistence, they do not simply “disappear” via dissolution. Additionally, they miss a specific intrinsic toxicity, which would be responsible for a totally different legal classification. The GBP per se are non-toxic. On the other hand, there are of course particles, which possess a specific toxicity. An example are the metal particles arising from welding processes inducing diseases such as the so-called “zinc shakes“. These particles do have specific health-relevant effects and are regulated by substance-based threshold limits and personal protection measures must be provided (e.g. breathing masks) for such working places.

Totally different is the situation in the case of GBP without intrinsic toxic properties. The question is: why are these relevant for health as well? The fact is that all dust particles independent of size and composition have a common effect: they can affect the clearance mechanisms of the lung. A chronic exposure at the workplace leads to a steady increase of dust particles in the lung if the clearance process is slower than the uptake of particles. This results in a slow but steady increase of the totally lung burden which at the end may lead to a so-called “overload” of the lung. This may induce alterations in the lung tissue as in those parts with a higher particle concentration inflammation starts which can end in lung fibrosis or tumour induction. This is the reason for a sound regulation of such, normally non-toxic particles via exposure limits at the workplace. The actual occupational exposure limit for GBP particles (inhalable fraction) is 1.25 mg/m3, but this value is also dependent on the density of the material (further information at German Federal Institute for Occupational Safety and Health BAuA – GBD OEL).

The Nanopart of the Inhalable Fraction

There are different reasons to especially look at the very small particles, the nanoparticles, considering consequences of their inhalation at the workplace. They behave differently compared to their larger counterparts (e.g. they stay longer in the air because of their very low mass), exhibit different properties (e.g. they agglomerate loosely to form larger particulate structures with a different density compared to the original material) and have a much larger specific surface to volume ratio. Summarized here are the reasons of concern to establish stricter threshold limits: