The air-blood barrier is a structure present in the lungs that controls gas exchange by means of pressure and concentration gradients. However, all other foreign material in our breathing air will be inhaled too if it is small enough, such as bacteria, viruses including nanomaterials. With this being a very thin barrier, the chance for nanoparticles to cross and enter the interior of our body is relatively high.

The adult human lung has a huge surface area of around 120m2 to 140m2 for gas exchange of oxygen and carbon dioxide. Anatomically it is made of a cascade of conducting airways, starting from the trachea, via the bronchi and bronchioli down to the gas exchange zone of the alveoli. These very small “air bubbles” are formed by epithelial cells, which are directly in contact on their interior side with endothelial cells forming the blood vessels. This alveolar barrier separates the blood within the blood vessels from the air inside the lung and can be very thin down to 200 – 500 nm [1].

As the breathing air contains a variety of different substances, like germs, dust particles or other contaminants, the lung has special clearance mechanisms in place to handle such contaminations. Normal air contains 1.000 up to 10.000 microbes/germs and 10 to 50 micrograms of fine and ultrafine dust particles per cubic meter. This means that an adult human who inhales 10.000 – 15.000 litre of air per day is in fact inhaling more than 10.000 microbes and more than 10 billion particles each day.

The clearance mechanisms of the body consist of two different principles, namely the alveolar macrophages and the ciliated mucociliary clearance of the upper airways. Depending on their size, particles deposit in the different regions of the lung where they are engulfed by macrophages in the alveolar region, which move then upwards to the bronchioles and bronchi. Large particles are directly transported upwards via the mucociliary clearance, also called the mucociliary escalator. Afterwards this mucus, containing the foreign substance, is removed from the lung by coughing, swallowing or spitting.

The size of the particulate matter (PM) is not only important for the deposition within the respiratory tract but also for the potential transfer into the blood stream. In this relationship, the Dust Definitions of the World Health Organization (WHO) distinguish between inhalable, thoracic and respirable dust. Whereas inhalable dust is the fraction that can reach the upper airways such as the mouth, nose and throat (PM10 < 10 µm), the thoracic fraction is much smaller and can penetrate into the airways of the lung (bronchi and upper bronchioles) (PM2.5 <2.5 µm). The respirable particulate dust fraction contains the smallest particles (PM1 < 1 µm), which are able to enter the alveoli, the gas-exchange region, and there potentially cross the cell layers to penetrate into the blood stream [2,3,4].

Actually there are evidences that a very small portion of the overall inhaled dose (less than 1 per million) reaches the blood stream and ends up in secondary organs such as the kidneys, liver, heart, spleen, and others. It is discussed that particles may contribute to respiratory, inflammatory and cardiovascular diseases [5,6]. These effects are well known from dust exposure at the work places (such as mining) or during high exposure episodes in the environment like the smog episodes 2015 in Beijing (China) or the dramatic smog episode in 1952 in London (UK). In case of such a severe air pollution, the amount of particulates in the air can get as high as 1.000 micrograms of dust particles which equalises to 100.000 up to Millions of particles per cm3 (1 millilitre).

Since nanoparticles fall into the same size category as the smallest PM-fraction (PM1), they should be able to cross the air-blood barrier in a similar manner. However, the majority of an applied dose will be recognised by macrophages and transported out of the lung [3,4].

Nowadays nanomaterials are used in a huge variety of different products such as surface coatings, paints, textiles or technical equipment. Hence, inhalation of these nanomaterials is possible during the production but also during the products’ usage and disposal. Moreover, several medical diagnostic or therapeutic products are made of or contain nanoparticles to either directly treat the lung or other diseases via the lung (see cross-cutting article Nanomedicine. 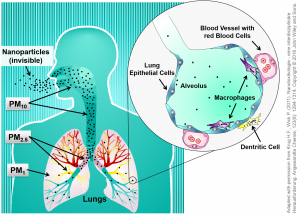 It is therefore important to discriminate between an intended exposure (medical treatment) and an unintended inhalation e.g. at the work place or during the use of the products. It is generally accepted that the lung is the most critical entry pathway for small particles into our body. This is the reason for specific regulatory and protection measures for workplaces with a high dust exposure probability. In Germany, the Federal Institute for Occupational Safety and Health (BAuA) takes care of such regulations [7,8].

Many studies have described that inhalation of high concentrations of metal oxides or other nanomaterials, which belong to the granular biopersistent particle fraction (GBP),could lead to lung inflammation [9,10]>. Moreover, the geometric shape/structure of particles is also a crucial factor that determines lung toxicity. The structural similarities between mineral fibres and manufactured nanofibres including nanotubes, nanorods, and nanowires have been mentioned as a concern to have the same effects as asbestos fibres under specific circumstances. It has been proven that only long and thin nanofibres and long asbestos fibres are responsible for long-term inflammation and extensive fibrosis in lung tissues [5,11,12].

In Germany, these interactions are addressed in projects funded by the Federal Ministry of Education and Research  (BMBF) such as CaNTser, nanoCOLT, and CarboTox.

It is known from many epidemiological studies that the lung burden with ultrafine particles is directly correlated to some severe diseases especially after long-term inhalation. Thus, it is of utmost importance to investigate these effects in detail for engineered nanomaterials to avoid exposure to specifically hazardous nanomaterials.