In general terms paint depicts a liquid that is used to coat a solid surface in order to protect, seal or colour it. For this purpose pigments such as solid particulates play an important role and have been used since millennia e.g. for cave painting. 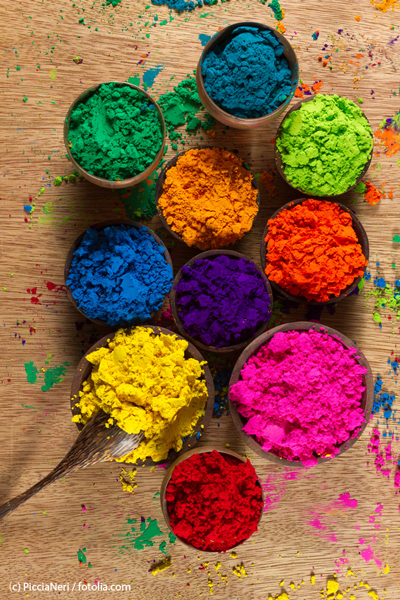 Today, nanomaterials are being used in order to improve the efficiency and to provide new functionalities to the paints. There are already several nano-enhanced paints on the market. Recent studies have investigated the benefits and risks of paints containing nanomaterials. Exploring the benefits and risks during early stages of innovation will help to avoid risks and maximise opportunities of nano-paints.

Paints are complex mixtures of substances (pigments, resins/binders, solvents and additives). They are usually applied on walls (indoor), facades (outdoor), vehicles and furniture, among other purposes. Depending on the surface type, e.g. concrete, bricks, stone, wood, metal or glass, they are developed to meet particular requirements: decorative appearance; protection against radiation, humidity/water, microorganisms; fire protection and thermal insulation. There are water- and oil-based paints, which can have additional functionalities depending on the necessities of the consumer. Nanomaterials are thought to improve these functionalities, i.e. water/dirt repellent “easy to clean”, UV-protection, antimicrobial resistance, scratch resistance or extending the paints’ lifespan.

Nanomaterials are expected to improve the existing properties of paints due to their specific structural characteristics such as size, shape and greater surface area [1].

Currently, the most relevant nanomaterials for the paint industry are nanoscale titanium dioxide and silicon dioxide; but silver, zinc oxide, aluminium oxide, cerium dioxide, copper oxide, and magnesium oxide are also under investigation. The table provides an overview of potential functional benefits by integrating nanomaterials into the paints [2].

Depending on the type of paint and the desired functionality, nanomaterials can be integrated as free powders, as stabilised particles in a suspension/dispersion or incorporated into master batches or granulate resulting in the nanomaterial being firmly embedded in the paint matrix.

There also exist paints or products that have a nanostructured surface, contain nanoporous materials or temporarily contain nanostructured particles (e.g. produced from water glass during the drying of the paint). As these end products do not contain any nanomaterial, they are considered to pose no nano-specific risk to humans or the environment [3].

Effects of nanomaterials in paints

Nano titanium dioxide is used in paint to exploit two of its excellent properties: (i) photocatalytic activity and (ii) UV-protection. The combination of the photocatalytic effect, along with hydrophilic properties results in a paints’ self-cleaning effect. The surface will no longer need regular cleaning as the water and dirt will no longer stick on it. However, studies have shown that the use of photocatalytic nano titanium dioxide in organic paints leads to the degradation of the binder by UV irradiation [4]. For this reason, the rutile type is preferred in organic facade coatings for UV-protection.

The addition of nano silicon dioxide to paints can improve the macro- and micro-hardness, abrasion, scratch and weather resistance. Adding nano silicon dioxide to polymeric resins creates paints with excellent abrasion properties. However, it decreases the elasticity of the paints, which is needed to resist the swelling and shrinking associated with temperature and humidity changes [5,6].

Surfaces coated with nano silver containing paint provide excellent antimicrobial properties against bacteria and human pathogens [7]. However, in contrast to indoor paint, the bactericidal efficiency of nano silver in paints for outdoor application seems to be insufficient due to the exposure to external conditions. Studies have shown that nano silver [5] as well as nano titanium dioxide [8], are not able to fully prevent microbial and algal growth on test substrates in addition to being a poor deterrent from possible fungal colonisation.

Recent projects like NanoHouseinvestigated the benefits and risks of integrating these nanomaterials in paints, mainly with focus on facade (outdoor) paints. Major focus was on identifying where a release of nanomaterials from the paints into the environment could be possible during its life cycle (i.e., production, use and end of life). 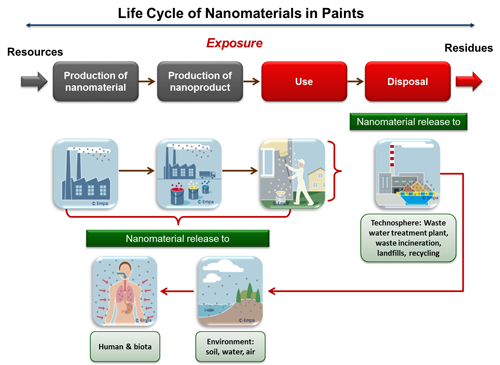 Life cycle of nanomaterials in paints. © used with permission from the NanoHouse Project / www.empa.ch/nanohouse.

After abrasion, weathering & leaching none of the analysed nanomaterials were significantly released into the air and only very small amounts of titanium dioxide and silicon dioxide into water. After incineration of paint debris, these three nanomaterials (TiO2, SiO2, silver) were only observed in the ashes.

In the short term, the analysed paints containing nanomaterials showed a similar toxicity to conventional facade paints but performing of long-term experiments was recommended.

NanoHouse also performed a life cycle assessment (LCA) to evaluate whether using nanomaterials in paints could be beneficial for the environment. An improvement of the environmental benefits when using a nano-paint depends much on its actual composition and functionality and can therefore not be generalised. Equally, the production of the nanomaterials and the nano-paints has a strong impact on the environment. Extending the paints’ lifetime by integrating nanomaterials in the formulation is one potential benefit which could over-compensate the larger impact of the production of nano-paints compared to a conventional ones [3].

The NanoHouse project identified the following hotspots for unintended release of and exposure to nanomaterials [2]:

For nano-paints, it is recommended to pay special attention to occupational health aspects for avoiding dust generation during production, maintenance and recycling. It is equally important to explore the potential benefits during early stages of innovation using a safe-by-design approach to select/modify the nanomaterial and the paint formulation in order to avoid risks (release and effect) and maximise opportunities.