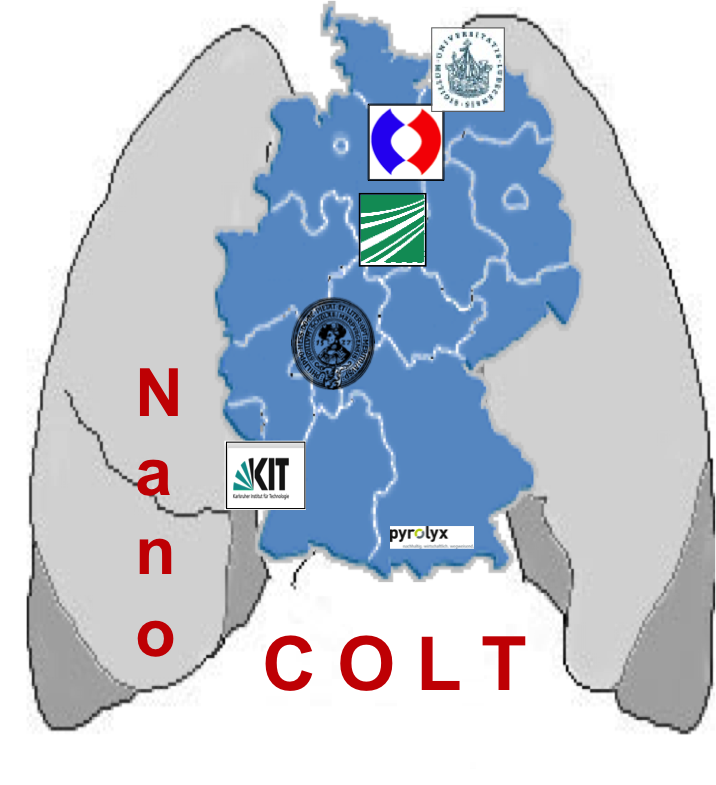 Based on the previous project CarbonBlack, the joint research project nanoCOLT investigated the interrelationships between material properties of manufactured carbon black nanoparticles (CBNP) and potential lung damaging effects in a low-dose range. A particular focus of the project nanoCOLT was to test first, if long-term CBNP-exposure of healthy lungs results in any histological and physiological alterations. Second, nanoCOLT aimed at testing if pre-damaged (diseased) lungs would respond more sensitive than healthy lungs to an exposure with carbon black nanoparticles. Further, the project sought to identify cell and tissue culture systems, which were suitable to predict potential effects of carbon black nanoparticles in humans. The results obtained from these in-vitro and ex-vivo test systems were finally verified in an in-vivo inhalation exposure experiment in rats according to OECD guideline 413.

Various in-vitro and ex-vivo test systems, partly established in the previous project CarbonBlack such as e.g., explant models of the murine trachea and of intra-pulmonary airways as well as human precision cut lung slices, were refined and novel test systems such as a particle-induced cell migration assay (PICMA) and an air-liquid-interface epithelial cell culture model were tested for their suitability as toxicity assays. In the in-vitro and ex-vivo systems, the carbon black nanoparticles to be tested were applied at concentrations of 1, 10 and 30 μg/ml, whereas in the in-vivo animal experiments a dose of 70 μg carbon black nanoparticles per animal were applied either once or seven times at an interval of two weeks.

Based on our studies in the ex-vivo and in-vivo animal models, our research network concludes that the tested tailor-made carbon black nanoparticles exhibited only a low degree of acute toxicity both in healthy lungs as well as in lungs pre-damaged by exposure to nitrogen dioxide (NO2) or experimentally induced allergic asthma. The low-level effects observed are particularly determined by their surface chemistry. Repetitive exposures as model of a long-term exposure also resulted in only low-level effects of the test carbon black nanoparticles in the ex-vivo and in-vivo animal experiments. The in-vivo inhalation exposure study was performed using Printex®90 as reference particle and acetylene soot and Printex®90 coated with benzo[a]pyren as test carbon black nanoparticles. The sub-chronic exposure acetylene soot induced a stronger inflammatory response in rats than exposure with Printex®90 or Printex®90 coated with benzo[a]pyren.

The ex-vivo studies in human precision-cut lung slices revealed that also in the human test system there was no direct cell-damaging effect of the test carbon black nanoparticles on healthy and diseased (pre-damaged) lungs. The carbon black nanoparticles rather induced initial inflammatory processes in healthy human tissues that are characteristic of physiologic reactions on noxae and which can be seen as protective mechanisms. Notably, no such inflammatory reactions to be seen as physiologic protective mechanisms were observed in tissues of diseased lungs (pulmonary fibrosis) exhibiting marked histopathologic alterations. The results obtained in the human ex-vivo test system are largely congruent with the findings from the ex-vivo and in-vivo animal experiments.

In summary, the joint research network nanoCOLT finally concludes that, on the basis of a variety of experiments using in-vitro, ex-vivo and in-vivo test system in mouse, rat and human cells and tissues, respectively, the acute and sub-chronic toxicity of the test carbon black nanoparticles in the low-dose range can be ranked as low and that the effects are primarily determined by the surface chemistry. Whether the absence of inflammatory reactions seen as physiologic protective mechanisms, which was observed in the human ex-vivo test system when using histopathological strongly altered tissues, will have a negative impact on the underlying lung disease during chronic exposure and increasing persistence of the carbon black nanoparticles in the lung, has to be addressed in future studies.