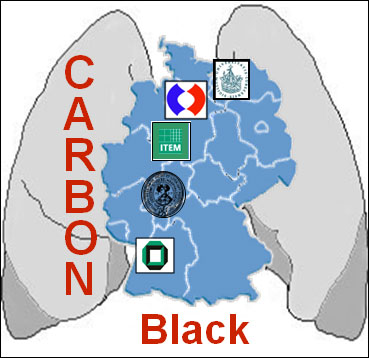 CarbonBlack was a joint project aimed at establishing a test system with test models of increasing complexity to verify the toxicological effect of modified and well-characterised carbon black nanoparticles (CBNP) in the respiratory tract and in the lung. The multi-stage test system included simple cell culture models, tissue culture models, and verification methods based on inhalation studies within animal models.

It has yet to be determined whether the potential risk of carbon black nanoparticles is determined primarily by the particle size and geometry or by the surface chemistry. Therefore, the Carbon Black project consortium analysed and compared unmodified carbon black nanoparticles (Printex90) with CBNPs coated with polycyclic aromatic hydrocarbons (PAHs). The PAH-containing group of CBNPs include Printex®90 nanoparticles, which were coated with benzo[a]pyrene or 9-nitroanthracene and acetylene black particles, which are equipped with a mixture of various PAHs on the particle surface. Basis for all analyses of the corresponding biological effects was a thorough chemical and physical characterisation of the carbon black nanoparticles. The nanoparticles were suspended according to a standardised protocol and then send to all project partners for testing in the various model systems of increasing complexity.

The overall results of the CarbonBlack project clearly demonstrated that the effects of carbon black nanoparticles in biological systems are largely determined by the chemical nature of their surface. The strongest biological effects were seen in the in vitro and ex vivo systems when exposed to acetylene black particles. After treatment with CBNPs, the observed effects were largely associated with the induced mRNA expression of cytochrome-P450-oxidoreductases CYP1A1 and CYP1B1 together with an increased cytotoxicity particularly in cells with secretory function. Acetylene black proved to be the only carbonaceous nanoparticles, which stimulated the mRNA expression of proinflammatory cytokines / chemokines.

In the mouse model, the impact of the carbon black nanoparticles on the respiratory epithelium showed a decrease from the trachea down to the bronchioles. The induction of proinflammatory cytokines in the lung parenchyma was more pronounced in the tissues of rats and humans compared to the mouse, which was confirmed in comparative experiments on precision cut lung slices (PCLS). After oropharyngeal aspiration of suspensions with carbon black nanoparticles, only acetylene black particles caused an increase of alveolar epithelial cells type II, as well as an altered mRNA expression of key enzymes responsible for synthesis of alveolar surfactant.

The findings of the in vitro and ex vivo assay systems correlated well with the performed in vivo inhalation study. Exposure of rats to carbon black nanoparticles using the OECD test guideline 412 showed no significant toxic effects with only the acetylene black particles causing a very moderate inflammation.