Nanotechnology offers numerous new applications in various areas of industry (e.g., in the chemical industry, electrical engineering, and medical engineering). The specific challenge lies in the optimal use of the potentials of these partially new technologies and, at the same time, in their responsible handling. 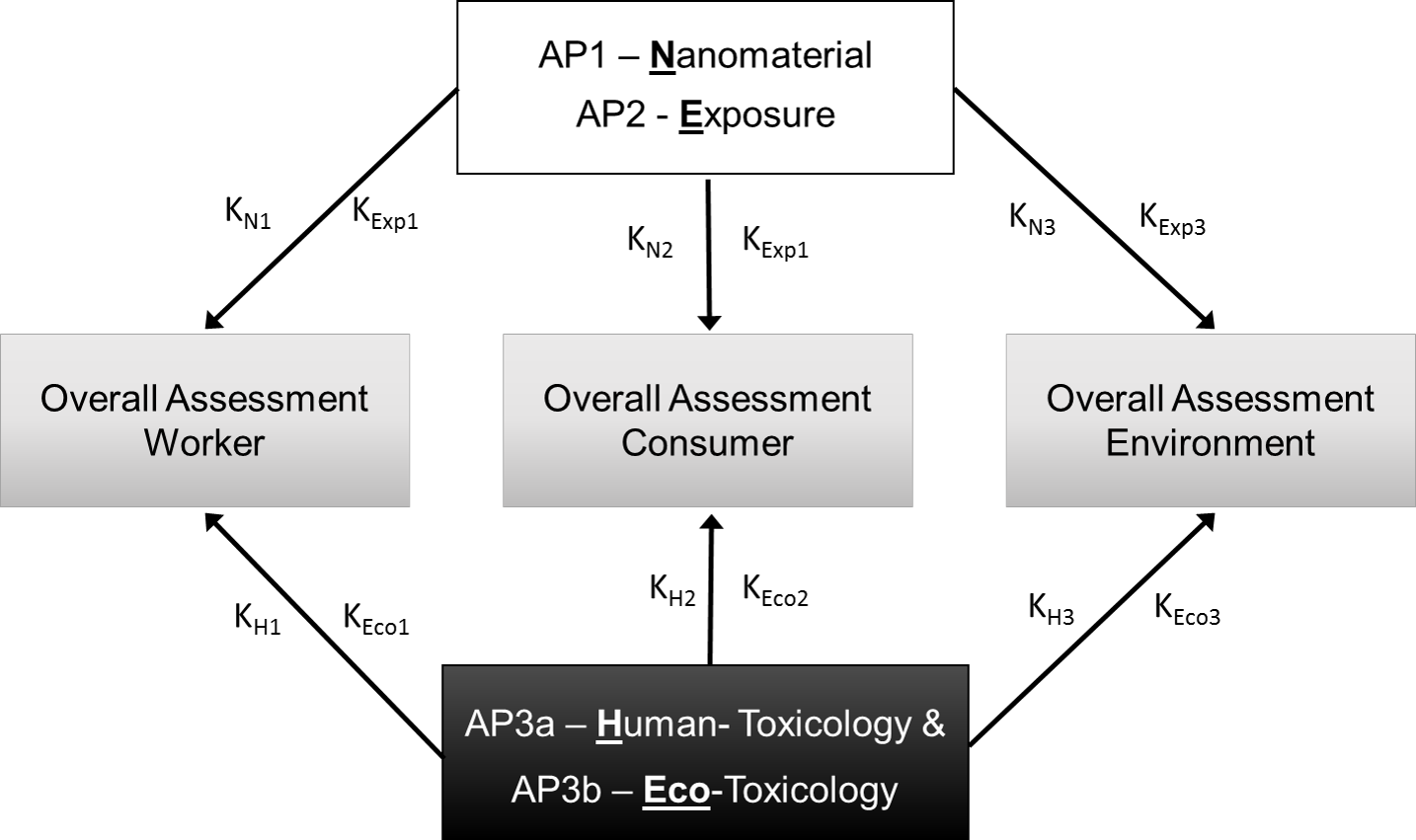 Scheme for the derivation of criteria catalogues (K) for different protected assets based on the risk-determining factors nanomaterial properties (N) release / exposure (Exp) and hazard (H and Eco).

In view of the large variety of existing synthetic nanomaterials, some of which have been used for decades in conventional products and most of which, besides, are available in numerous modifications (different sizes, shapes, chemical composition, and surface functionalisation), the effort of analysing their behaviour and effects while observing specific regulatory requirements is tremendous. Regarding the variability of possible effects, it is, in addition, impossible, to assess the potential risk for each individual nanomaterial.

The current state of knowledge on the hazard of nanomaterials towards protected assets is so complex that the nanoGRAVUR project made it its central objective to develop different criteria catalogues for a grouping of nanomaterials according to the respective potentials for exposure, hazard and risk. The grouping approach, which so far has been used only in special cases (e.g. for fibres), can, among other things be used in areas such as occupational health and safety, product identification, and regulation, which presently still must rely on individual case studies.

One of the major objectives of DENANA was to derive design criteria and to test the usability of data generated in the project for hazard and risk assessment of nanomaterials. The nanomaterials silicon dioxide, (SiO2), cerium dioxide (CeO2) and silver (Ag) were chosen due to their market relevance as they are added, among other things, to lubricants, catalytic convertors, medical products and abrasives and a potential environmental exposure of these nanomaterials. In order to differentiate between the potential of certain nanomaterial properties to influence a specific environmental behaviour or an environmental effect and thus to function as possible design criteria, variations of these nanomaterials were prepared and tested in different behavioural and effect investigations.

Europium- and Palladium-doped CeO2-NMs and functionalized SiO2-NMs were prepared in the frame of the DENANA project and extensively studied for their toxic potential in water and soil. Goal of the developmental work on the SiO2-NM was to optimise lubricants. In addition to the ecotoxicological effects of nanomaterials, questions on the behaviour of nanomaterials in soils and sediments, especially mobility and transport, were considered.

Only very limited statements on the relevance of the tested differences in the physico-chemical properties of the nanomaterials with regard to the ecotoxicological effects can be made since no clear effects or clear differences of effects and behaviour between the various nanomaterials occurred. Therefore, it is hard to assess the relevance of the individual physicochemical properties as design criteria for environmentally sound nanotechnology applications. Based on the data generated in DENANA, however, qualitative statements on the suitability of the various physicochemical properties as relevant design criteria for applications using the three nanomaterials are possible. The following relevant parameters were identified: core material, ion toxicity, solubility and zeta potential. The suitability of primary particle size and ROS formation potential as design criteria for nanomaterials cannot be determined based on the DENANA data. In addition, the agglomeration behaviour under environmental conditions should be considered for the respective application scenarios.

Furthermore, the ecotoxicological behaviour of the nanomaterials affected other properties, which are critical for an environment-friendly, harmless design. Throughout the investigation period of 3 years, the Ag-NM continuously caused negative effects in the investigated soil microorganisms (ammonium-oxidizing microorganisms with substrate-induced respiration) under field conditions, which could not be reversed by sulphidation of the Ag-NM. For sewage sludge applications it is therefore necessary to assume an accumulation of the respective substance and, in the case of silver, a significant increase in the toxicity to the soil microorganisms. This impairment can also be demonstrated in advance in short-term laboratory tests, which can thus serve as early warning indicators for toxic, soluble nanomaterials such as Ag-NM.

Aquatic test systems showed the crucial importance of chronic test systems (algae growth, daphnia reproduction) in the investigation of nanomaterials. An important finding is that the aquatic toxicity observed in chronic tests is caused by agglomeration of the nanomaterials, which causes mechanical / physical effects such as clouding or attachment to the test species, but also malnutrition. An uptake of nanomaterials into plant roots could be demonstrated for Ag-NM and CeO2-NM.

Work on the behaviour of nanomaterials in soil showed that different stabilisation mechanisms of Ag-NM and soil properties lead to variations in the nanomaterials’ mobility in environmental media. Furthermore, the results showed that formulations and dispersion aids can also influence the toxicity of the nanomaterials or, in the case of non-toxic SiO2-NMs, even cause it.

NanoUmwelt – Risk analysis of engineered nanomaterials in the environment: identification, quantification and analysis of the human- and ecotoxicological effects

Aim of the project NanoUmwelt was to quantify the entry of engineered nanomaterials into various environmental compartments, to characterise their form of appearance and to develop a deeper understanding of their eco- and human-toxicological impact using novel analytical methodologies and scientifically sound analyses. The data generated within NanoUmwelt shall serve as a reliable basis for a realistic risk assessment of nanomaterials after their entry into the environment and for the development of appropriate recommendations for novel regulations with regard to the protection of human life and the environment. 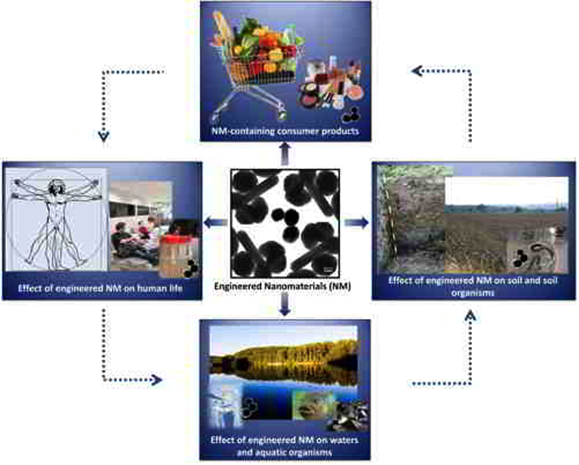 Against this background, NanoUmwelt had dealt with three different tasks:

The most important developments within NanoUmwelt are:

The most important findings of NanoUmwelt are:

InhalT-90: 90 days inhalation testing with CeO2 in the rat and subsequent analysis of gene expression profiles for the early detection of toxic / carcinogenic effects

In the past ten years, toxicological characterisation and evaluation have been attaching enormous weight and interest to the technically versatile synthetic nanoparticles used in chemistry, medicine, environmental engineering, and energy technology. This development is mainly due to the fact that on account of their “viral” size, nanoparticles, in comparison to their microscale equivalents, have very large reaction surfaces and a high translocation capability when they actually act as isolated particles instead of as agglomerates. As there was an ongoing discussion of a possible tumorigenic potential of nanoparticles after inhalation, an exemplary carcinogenicity study in the rat model was suggested within the framework of the EU-project NanoREG. To exclude lung overloads, an explicitly low dose regimen ranging from 0.1 – 3 mg/m3 was chosen. This regulatory chronic study has been financed by BASF SE, and is currently performed using cerium dioxide nanoparticles (CeO2) in powder form.

Parallel to the BASF long-term project, the BMBF-funded project InhalT-90 is carried out under identical exposure conditions using a rat model and CeO2 nanoparticles as well. New innovative approaches are applied to identify early indicators of toxic and/or carcinogenic effects through gene expression analyses that allow drawing conclusions as to a change in gene expression profiles. The InhalT-90 project focuses essentially on finding answers to the question as to whether such changes can be triggered by nanoparticles or nanopowders for certain concentration ranges. A toxic effect could be identified already at a very early stage. In addition, the identification of certain recurring effects referred to as biomarkers could be transferred to other nanoparticles such that fast screenings of the toxicity of nanoparticles could be developed.

Findings of cancer cells often come at the end of a long chain of developments starting early in life through some damage to the genes or tedious long-time inflammatory reactions. The approach chosen in this project hence intends to contribute to the mechanistic clarification of a potential genotoxicity of nanoparticles.

The cerium dioxide nanoparticles selected for the purpose of the InhalT-90 project are, for example, used as additives in diesel fuels to boost combustion. The distribution of these nanoparticles in the lung and in the body is investigated by means of element analysis and particularly sensitive spectroscopic methods such as ion beam microscopy (IBM) and confocal Raman microspectroscopy (CRM). 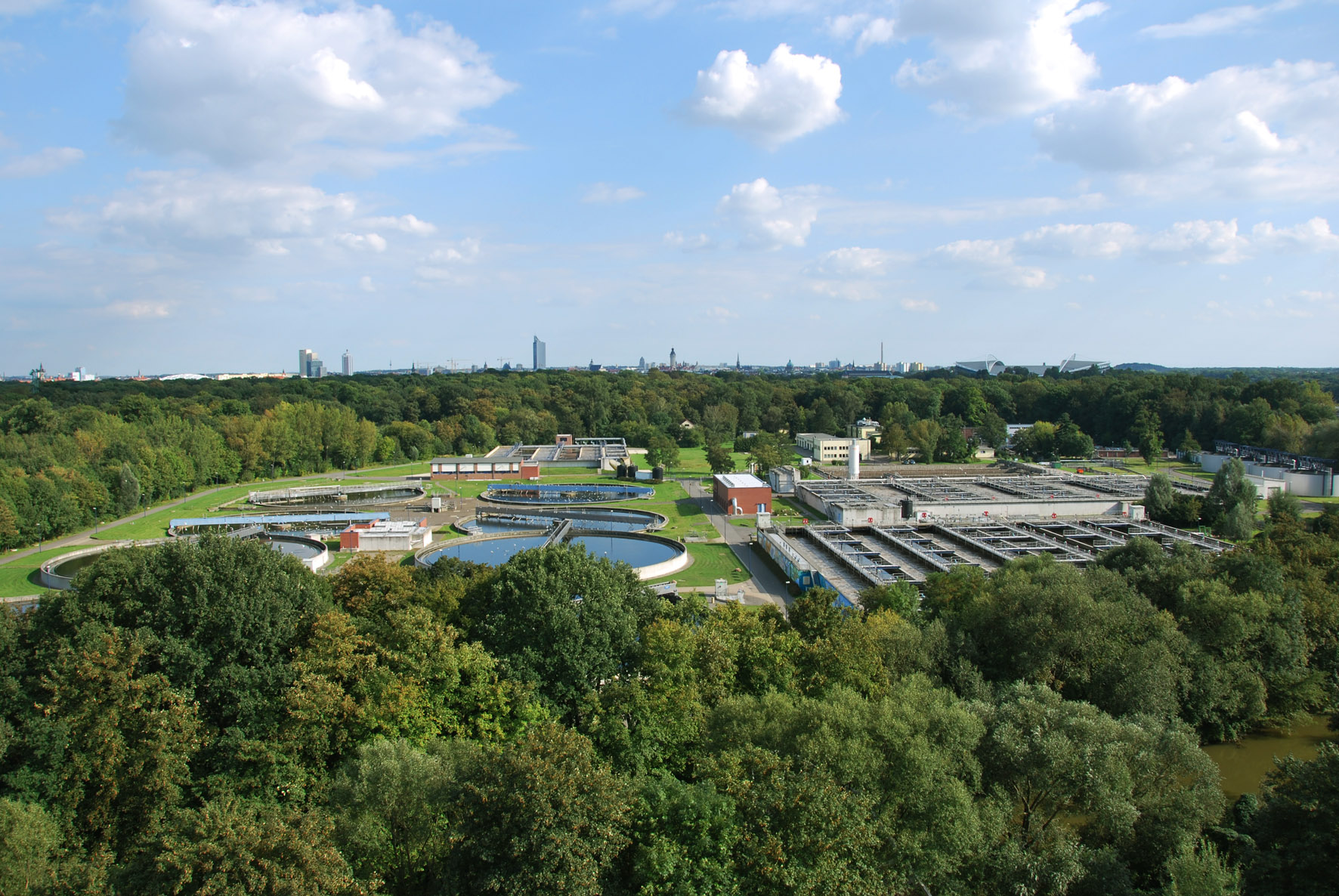 The distribution of particles from sewage sludge in the environment is analysed based on data from possible nanoparticle uptake by plants. To that purpose the uptake of nanoparticles and the corresponding mechanisms of action at different stages of plant growth will be investigated. Besides, the availability of nanoparticles in soils is investigated by means of transport studies.

The use of radiolabeled nanoparticles in the analyses is a particular methodological feature providing considerable experimental benefits and enabling detection of nanoparticles at the expected low “real” concentrations in highly complex environments due to distinction from the background concentration. In the laboratory, the radiolabelled particles are applied to water, soil and plant samples. These samples are subjected to treatment steps identical to those they would undergo in a sewage treatment plant and subsequent processes like processing of sewage sludge, its application as fertiliser up to a possible absorption by the plants. Such procedure enables both process analyses and the development of detailed knowledge about the behaviour of nanoparticles during the different water treatment stages through to the sewage sludge – soil – plant system.

Requirements regarding environmental protection will be derived, and proposals for optimisation of the sewage treatment processes will be developed together with the operators of the sewage treatment plants. The close interdisciplinary cooperation of a research institution with two industrial partners and three municipal operators promises a successful approach to the complex problems discussed above.