The skin is the body’s largest organ and protects the body against diseases caused by organisms, toxic chemicals, and mechanical damage. Nanoparticles are neither able to easily penetrate intact skin nor through superficial injuries within the skin. Low level mechanical stresses applied to the skin are buffered by a layer called the stratum corneum. Secretion of ichor and other blood components protect deeper abraded skin sites from harmful impacts. Nanoparticles, however, can be deposited in the hair follicles, and this route is used in medicine for the release of nanoparticle-bound drugs or vaccines, which subsequently are and delivered to the body. Normally, nanoparticles applied to the skin can be removed by washing. 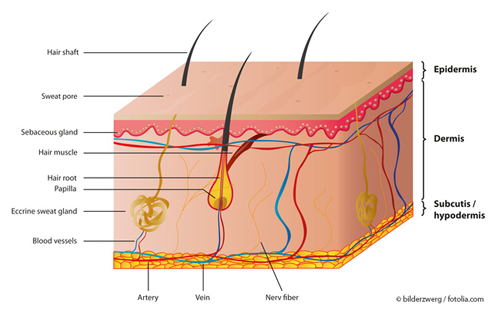 Structure of the skin © bilderzwerg / fotolia.com

The skin (cutis) is composed of three primary layers epidermis, dermis and hypodermis. Embedded in the epidermis and dermis are hair follicles together with the hair itself. The uppermost layer of the epidermis is called stratum corneum, which has a thickness of 12-200 cell layers, depending on the region of the body. Together with intercellularly stored lipids, these (dead) cells form a water-repellent layer that also provides protection against particles. This mechanical barrier equally limits entry of microorganisms or other environmentally derived substances into the body, and prevents water loss. The skin is a highly dynamic tissue and is renewed constantly [1].

Lipophilic, low-molecular substances (like nicotine, fentanyl, buprenorphine, sex hormones, clonidine, or nitro-glycerine) can be taken up across the skin into the body via e.g. drug patches relatively easily, and theoretically this also provides a route of entry route for nanoparticles. However, many studies have concluded based on detailed analyses that none of the nanoparticles investigated are able to penetrate intact skin via the uppermost layers of the cornea [2-7].

The European research project NANODERM has investigated extensively the ability of nanoforms of the metal oxides titanium dioxide and zinc oxide, commonly applied in sunscreens as inorganic UV-blockers (also called mineral UV-Filters) for UV protection, to penetrate the skin layers. The project has shown that in spite of the smallness of these particles, no particles or agglomerates were found to penetrate into the deeper layers of skin. The same was even true for slightly damaged skin [7]. Since July 2013, cosmetic products containing nano metal oxide ingredients carry a mandatory nano label (e.g. “titanium dioxide (nano)”).

It is possible that nanoparticles may deposit within the hair follicles in the skin, however, this is this not considered a genuine penetration of the skin [8,9,2]. Typically, these particles can be removed either by washing or by sebum (an oily secretion for the hair follicle) and hair growth [4,10]. If active ingredients (such as drugs) are bound to the nanoparticles, they will be released once inside the follicles, and they can then be transported through the skin into the bloodstream. This carrier and release mechanism could facilitate future drug delivery and vaccination systems avoiding the use of needles [8,9].

The robust nature of the stratum corneum enables it to easily deal with smaller mechanical stresses on the skin. In case of deeper abrasion, such as wounding, the secretion of ichor and other blood components serve to protect the body from other harmful influences. Both, titanium dioxide and zinc oxide nanoparticles, have been shown not to penetrate sunburnt skin (damage caused by UVB irradiation) and thus are restricted to the upper layers of the epidermis [11].

The skin is a truly remarkable organ protecting the body from a very wide range of external stressors from diseases caused by microorganisms, to damaging UV radiation, to noxious chemicals. These skin structures and features also make it a highly effective barrier against the penetration of manufactured nanomaterials.

A Full Retread – every 4 weeks

Whereas most somatic cells stop dividing after completion of their development, skin cells retain this ability throughout their lives. An amazing fact is that our skin undergoes a complete turnover (renewal) on average every 28 days. In this process, basal cells in the lowest layer of the epidermis are formed constantly and the overlying cells are pushed upwards where they then undergo desiccation, hornification and form the stratum corneum, turning formerly water-rich basal cells into the dry, dead skin cells of the cornea. The skin releases (exfoliates) up to 14 grams of dead horn cells every day. With age, however, the cell renewal process slows down, and the skin loses both moisture content and elasticity and becomes less efficient as a protective outer layer [12].

In summary for nanoscale UV-filter used in sunscreens to protect the skin from harmful UV rays, they have not been found able to penetrate the skin barrier in healthy animals.