In newspapers or on the internet the headline regularly appears saying that nanomaterials behave like asbestos in organisms and induce a rare form of cancer called “Mesothelioma”. What is the story behind such news, and should we be concerned about this?

Why is asbestos dangerous? 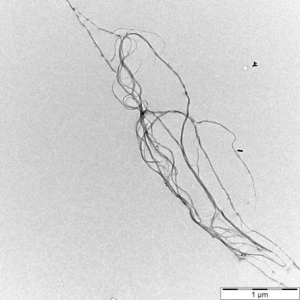 To answer this question, we should first understand how asbestos affects lung tissue, as this has been investigated very intensely [1]. Asbestos represents a group of fibre-like minerals, which mainly consist of silicon with various metals, oxygen and hydrogen. The most important property is the fibrillar consistency which leads to a lengthwise split making the fibres thinner and thinner during aging. If insulation materials contain asbestos, it may happen that during handling such thin fibres are released into the air and can be inhaled if no personal protection equipment is being used. The very thin fibres can deposit deep in the lungs where they interact with the cells and tissue. Due to their length, they will stay for weeks, months or even years (compare section clearance of the lung under Nanoparticles and the lung). For the inception of severe diseases the fibres should fulfil the criteria of the so-called WHO-fibres [2, 3]: they must be rigid with a minimum length of about 5 µm, a diameter less than 3 µm, and a length to diameter ratio greater than 3:1. Such fibres are thin enough to be inhaled deeply and long enough to remain for a long time, because they cannot be quickly transported out of the lungs again. These fibres are dangerous because macrophages, our cleaning cells in the lung, are too small to take them up. During the process of consuming such fibres the macrophages produce inflammatory signals and at the end they will die. Endless repetition of this procedure induces chronic inflammation, which lasts for many years and may lead to fibrosis or tumour formation in the lung tissue, very often in the space between the lung epithelium and the mesothelium. Here, a very rare form of cancer, the pleural „Mesothelioma“, is induced.

For this reason Europe has forbidden the use of asbestos for building insulation and other applications for more than three decades [4]. The substitutes, such as new mineral fibres or rockwool, are carefully regulated within European law to prevent comparable effects in workers or consumers.

The above-mentioned requirements for WHO-fibres are the basis for the so-called “fibre paradigm”: fibres of a specific form can induce cancer under special circumstances after inhalation. On the one hand, the fibres should have the geometrical properties as mentioned above and, on the other hand, they should be very stable in a biological environment (biopersistent). This is the basis for the “frustrated phagocytosis” which happens after inhalation of long and stable fibres that cannot be cleared by lung macrophages from the lungs. It means that the macrophages are not able to take up such fibres, but they send out inflammatory signals to attract other immune cells. This leads to chronic inflammation and after a longer period tumour formation and this may happen with nanofibres with comparable properties as well [5].

Nevertheless, the conditions for such an effect are clearly defined: nanofibres such as carbon nanotubes must be stiff and rigid, long (>5 µm) and thin and very biopersistent (Fig.). Thus, reports that all nanomaterials could behave like asbestos are wrong, because dust particles or nanoparticles are usually spherical/irregular and small and are incapable of inducing frustrated phagocytosis as macrophages can take them up and transport them out of the lungs. The clearance is much faster, and no chronic inflammation takes place.

Paradigm of frustrated phagocytosis for asbestos fibres and carbon nanotubes. © Used & adapted with permission from Donaldson, K et al. (2010). Asbestos, carbon nanotubes and the pleural mesothelium: a review of the hypothesis regarding the role of long fibre retention in the parietal pleura, inflammation and mesothelioma. Part Fibre Toxicol, 7 5. Open Access article [CC-BY-2.0 (http://creativecommons.org/licenses/by/2.0)].

The example of carbon nanotubes elucidated the fact that not all nanotubes exhibit such activity but only the rigid and stable ones which fulfil the criteria of the WHO-fibres. In the meantime, these very specific carbon nanotubes are used as an internal standard for the investigation of lung disease and tumour induction [6, 7].

As well as carbon nanotubes, other nanomaterials can be produced in the form of rods, fibres or nanowires. However, all these materials are subject to regulation, especially for fibres. For all such fibre-like materials, manufacturers have to consider whether they produce nanomaterials or not, since possible exposure to workers at the workplace via inhalation and the effect of frustrated phagocytosis will strongly influence if such materials come onto the market.