> Basics >Cross Cutting > In vitro tests for the benefit of nanosafety

In vitro tests are used in many fields of the biological sciences, since they are usually quick and relatively inexpensive. The term in vitro test designates the investigation of biological processes outside of an organism. These tests are extensively used in medical drug development. Besides of their merits, however, there are also limits for their applicability and for the conclusions that can be drawn. This is especially true in nanosafety, since nanoparticles can due to their unique properties interfere which these methods.

In nanosafety research, predominantly human cells are used. These are either cells that were obtained from human donors, or cell cultures which are maintained in the laboratory. The latter are derived either from tumor cells or from virus-infected cells which can multiply as much as desired. Conditions for in vitro tests can be very well controlled and it is usually possible to perform a larger number of tests compared to experiments using animals. In vitro tests also avoid ethical issues associated with the latter, but of course, ethically based regulations have to be followed when using stem cells or cells from human patients. It is possible to combine for a test different cell types in so-called co-cultures and in this way, specific aspects of organ structures can be reproduced. It is also sometimes possible to use complete human organs or parts thereof, as shown by the example of human placenta [1].

Which tests do exist?

Numerous test methods that were developed for a variety of applications have been described in the scientific literature. The spectrum is quite wide, reaching from simple cell cultures with only one cell type that grows readily in culture to highly complex co-culture systems („organ-on-chip“, „body-on-chip“). These complex systems may even be performed with cell types that have to be freshly obtained from patients for each new test or with cells that are produced by producing first re-programmed stem cells (so-called induced pluripotent stem cells, iPS cells. There are a great many tests which have been developed to address different questions and which allow to measure a similar multitude of different parameters (referred to as endpoints). Tests with cells that grow readily can be performed especially inexpensive and cheap. The vitality of cells for example can be determined by simple color-based tests, like the MTT assay. In the COMET assay, fluorescence signals provide indications about DNA damage. 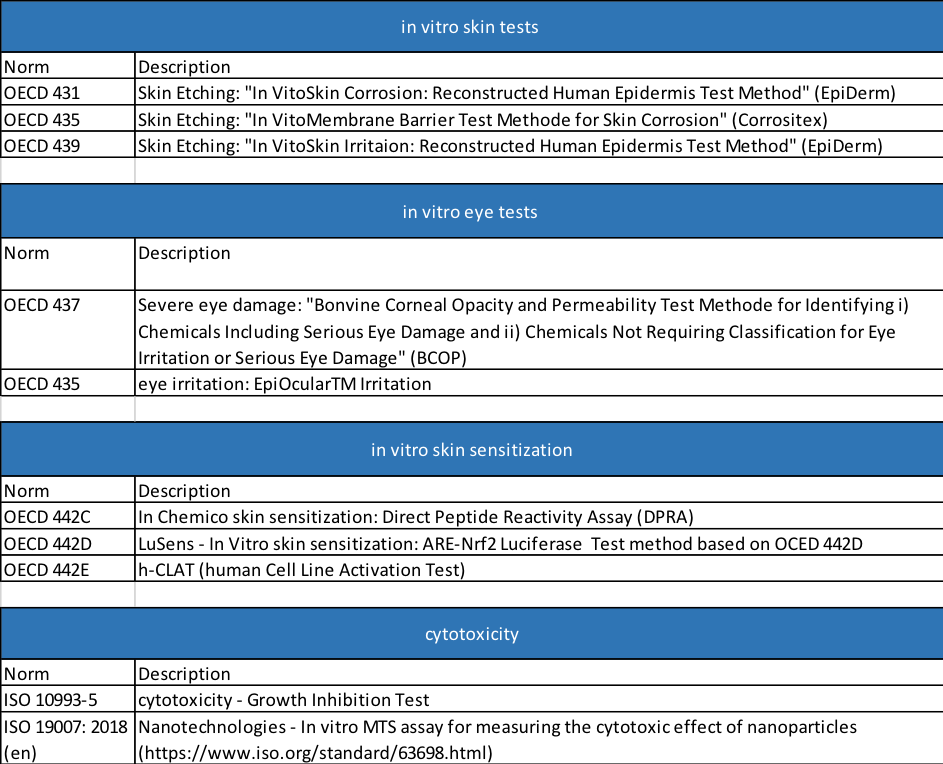 The Organisation for Economic Co-operation and Development (OECD) maintains a list of by now around 150 tests for chemicals [2]. This catalogue of internationally accepted methods contains tests for example for DNA damage, eye irritation, neurotoxicity, skin sensitization, interference with reproduction and effects upon inhalation or swallowing.

To demonstrate the safety of nanomaterials, it is important that such tests be recognized by independent bodies. Some classical in vitro tests are directly applicable to nanomaterials, but in some cases modified procedures are needed to cope with the specific properties of nanoparticles (see table). For example, many particles are colored or opaque (e.g. Carbon Black). This is a significant limitation because many systems provide data by using light. Meanwhile, older methods have been adapted for use with particles, and new methods have been developed specifically for particles. The further development and certification of such tests is an active field of research.

Who performs such tests? 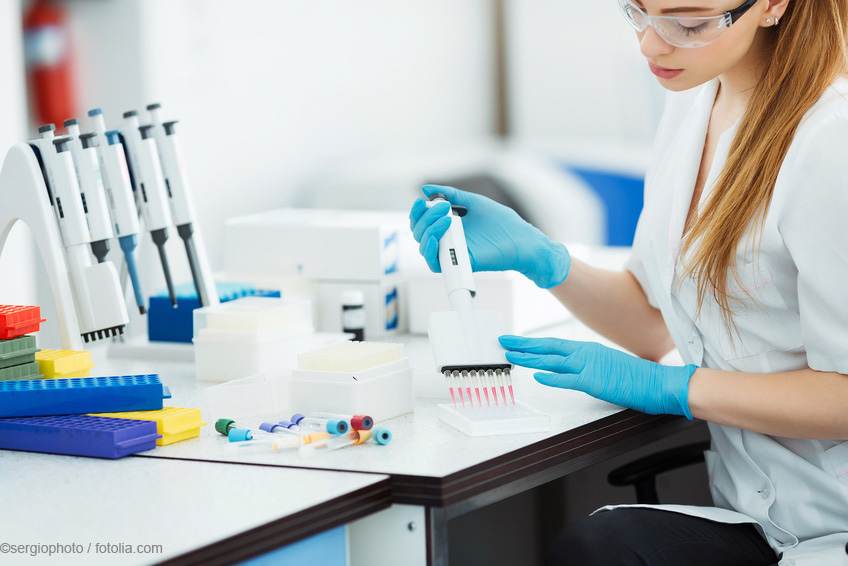 Woman in the Lab © sergiophoto / Fotolia.com

In vitro assays have been used in many areas of the life sciences, e.g. in medicine, biomedicine, pharmacy, biochemistry, molecular biology, chemistry and toxicology. In all of these areas, the behavior of cells and / or the effect of substances or environmental factors on cells and organ systems is addressed.
Their main uses in applied research have been for in vitro testing in the development of drugs where they are used by the pharmaceutical industry on a large scale. Examinations of the biological effects of nanomaterials are mainly based on methods developed for basic and pharmaceutical research. As mentioned above, some of these methods have been specifically tested for use with nanoparticles and if necessary were further developed. Research into nanoparticles today, therefore, draws on a range of suitable methods used by research institutes and companies – including pharmaceutical companies that are very interested in the increasing use of nanoparticles in nanomedicine.

What are the possibilities and limitations of such tests?

The pharmaceutical industry uses a combination of in vitro testing and animal testing to develop medicines. This is required by the regulatory authorities to minimize the risk to the human volunteers upon the first application of a drug in a clinical drug study. In vitro tests are very useful, but there are also questions that can only be investigated on animals that have a complex organism similar to ours and in which a comparable clinical picture can be found as in humans.
An important advantage of in vitro tests is that they are often relatively fast and inexpensive, so large numbers of samples can be handled. One can work with human cells, so one is in the species that we’re usually most interested in. There are cells from many different organs available, so it is usually possible to gain data on the tissue that is important for the situation under study. In cell culture one can control and manipulate the conditions very well, which is very important for the elucidation of molecular mechanisms. Some cells are derived from organs or parts of organs from donors when tissue has been removed during medical procedures. Frequently, these tissues conserve features of the clinical picture of the patient, so that with the cells obtained from damaged tissue, even aspects of disease states can be modeled quite realistic in the laboratory.

The methodology has its limitations because, e.g. a single lung cell does not get asthma. You can simulate certain aspects, you can also make three-dimensional models from different cell types, but it’s ultimately not an intact lung. Researchers are trying to create organ-like structures (“organoids”) from stem cells, but that too is just an approximation and, moreover, too difficult for routine applications. In addition, cell lines derived from tumors are genetically modified. This means on the one hand that they can divide indefinitely and therefore are available to researchers in large numbers and over a long period of time. However, on the other hand they do not really correspond to the cells of the original tissue. Although fresh cells taken from humans are more in line with the real situation, there are often big differences from person to person. Also, in the artificial environment of a laboratory these fresh cells of patients may change very rapidly their specific properties, so that one cannot draw fully reliable results from these investigations. Some cells are easy to extract, say from blood; others, however, are hardly accessible at all, say, from the brain. 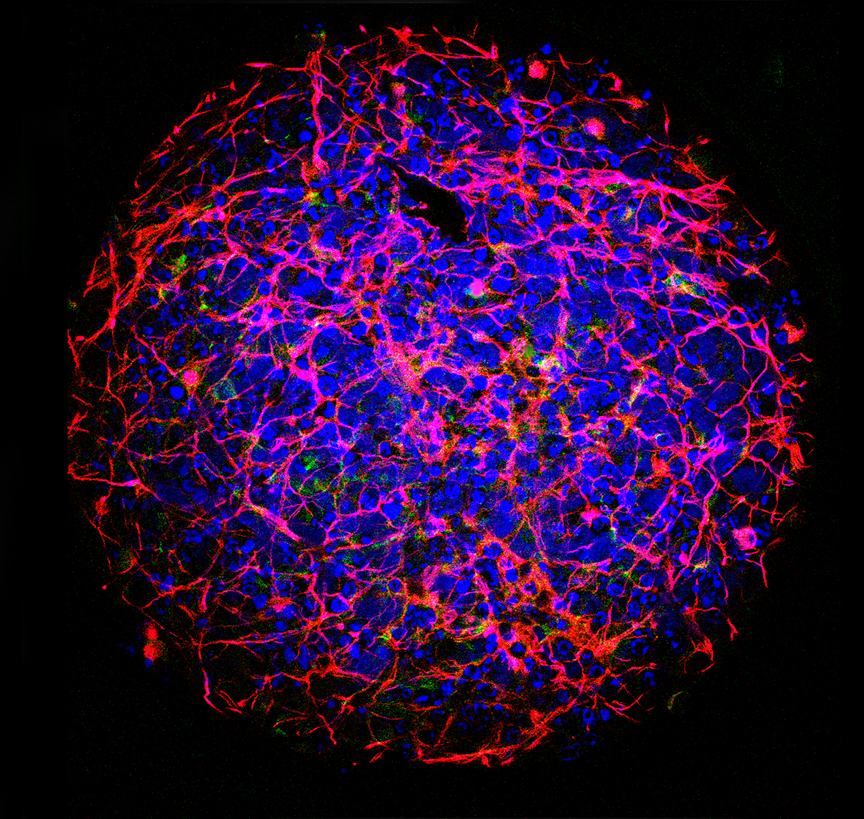 Microscopic image of a spherical mini-brain (ca 0,5mm in diameter) generated from neurons and other cell types in the laboratory, ©CAAT; JOHNS HOPKINS Bloomberg School of Public Health

It is currently a challenge to make tests even easier and cheaper without losing their reliability. It is expected that the in the future the major topics of automation and digitization will also have a major impact on these developments. Today, research facilities and companies already have method platforms that can be used to perform simple in vitro drug testing in a high-throughput process using robots. Ideal would be methods which could be automatically applied e.g. directly at a factory floor so that workplace safety can be monitored online using biological methods. With standardized in vitro test procedures, one could thus ensure the safety of products as well as safety at the work place. Of note, the principle applies that these procedures must be accepted and approved by the responsible authorities.

In vitro test procedures have been under discussion for decades, to replace animal experiments as completely as possible. As early as 1959 M.S. Russell and R.L. Burch developed the visionary 3R principle: Replacement, Reduction, Refinement (to reduce animal suffering). To really reach that goal, another problem needs to be overcome. Cells in a Petri dish do not behave like in their original environment as they lack important cell-cell contacts. For this reason, a tendency in modern cell biology is to replicate these contacts in the laboratory with in vitro organ models (see picture of the “mini-brain”). These complex in vitro models are currently being further developed in special research programs in order to be able to completely or partially dispense with animal experiments in basic and pharmaceutical research in the future.