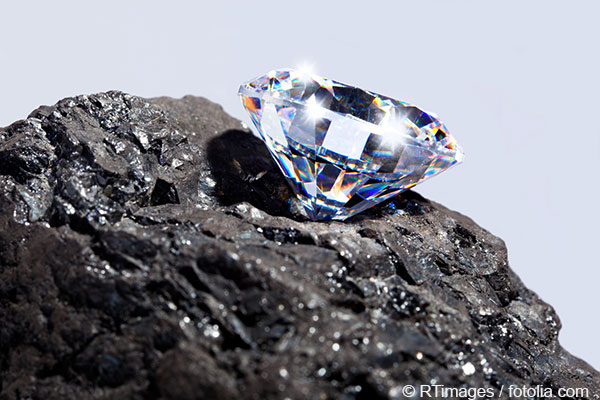 Diamond is the hardest known material. The industrial production of nano-scaled diamonds takes place at high temperatures and under high pressure. Applications of diamond nanoparticles include their use as filling components in synthetic materials and in the production of polishes. In oil for bicycle chains they supposedly reduce the friction. Diamond electrodes are also used in industrial wastewater treatment facilities for water purification purposes.

In everyday life the human body and the environment are only exposed to small quantities of diamond nanoparticles and diamond is considered to be non-toxic.

Diamond is a solid, the cubic modification of carbon and a precious mineral. Its crystal structure is formed by a three-dimensional framework of tetrahedrons in which each carbon atom is surrounded by four neighbors They are covalently bonded.All neighbors have the same distance to the central carbon atom.

Pure diamond is colorless. By impurities and defects in the crystal lattice the diamond may become brown, yellow, green, orange, blue, pink, red and gray to black. Due to its high refractive index and noble gloss, it is used as gem in jewelry in a variety of cut shapes.

Diamond is the hardest material known. It’s the only material that achieves the Mohs hardness number 10, the highest value on this hardness scale. The Greek name "Adamas" means the "unconquerable", since it can not be scratched by any substance but can scratch all other known substances. His abrasion resistance is 140 times larger than that of corundum. Therefore, it is used for making drilling, cutting and grinding tools and as an additive in polishing pastes. The hardness is dependent on the crystal orientation of the diamond (anisotropy). This makes it possible to grind diamond with diamond.

Its high modulus of elasticity, thermal conductivity and electrical resistance are also of importance. Small amounts of boron, phosphorus or nitrogen may transform diamond from an insulating to a conductive material whereby a semiconductor or a superconductor may be formed.

Diamond electrodes are used in waste water treatment for oxidation and disinfection processes. Due to its good thermal conductivity (1000-2500 W / (m * K)) it is used to cool thermally highly loaded electronic devices by dissipating heat. Diamond films made by chemical vapour deposition (CVD) serve primarily for wear protection of tools.

Nano-diamond has a diameter from a several nanometers up to a few hundred nanometers. Preferentially, particles with a diameter of less than 50 nm are used. Nano-diamonds play a role as plastic filler and in polishing processes for highest demands, particularly in micro-electronics. In chain oil advertisings they are (surprisingly) said to reduce friction. “Ultra-nanocrystalline diamond” is a brand name of Argonne National Laboratory covering a dispersed powder made by detonation techniques and a chemical vapor deposited film composed of individual crystallites in the range of a few nanometers. Nano-diamond is studied intensively as it is expected to enable new industrial technologies and to reduce raw material costs.

Diamond is not self-inflammable as nanometer-sized powder. Also as a mixture with air (dust) under the influence of an ignition source, diamond is not inflammable, so there is no possibility of a dust explosion. 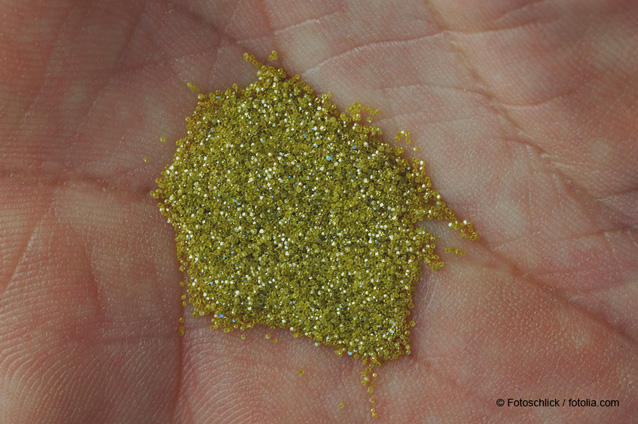 Natural diamond is formed under high pressure (100-150 kbar) and temperatures (1200 ° C-1500 ° C)in the mantle of the Earth at about 150 km depth. The starting material of diamond of the natural diamond synthesis is still unclear. Usually, it is assumed to be formed from carbon dioxide (CO2). Diamond crystallises very slowly. By volcanic eruptions and lava diamond achieves the surface of Earth. If cooled down quickly, the conversion into graphite may be suppressed.The most important mining areas are located in Russia, Africa and South Africa, Australia and Canada. Diamond nanoparticles have already been shown to exist in outer space, so they should haved reached earth, too. But, terrestrial nanodiamond has not been detected hitherto.

Synthetic diamonds were made for the first time by the physicist Erik Lundblad in 1953 via a high-temperature high-pressure process. The conversion of carbon into diamond occurs at 1200-1400 ° C under a pressure of 5-7 GPa, with the help of metal catalysts. Today artificial diamonds are produced for industrial use at large scale. In the 1960s Soviet researchers first demonstrated that diamond also can be deposited from the gas phase at atmospheric pressure by chemical vapour deposition. Today, several micrometers thick wear layers are produced at industrial scale. Also centimeter-sized crystals, which are used as optical windows in measuring devices, can be produced in this way. Nanoscale diamonds are obtained by means of shock waves or detonation operation where high temperatures and pressures can be reached for a short time.

Studies on Living Organisms - in vivo

A study with mice showed that 50 nm diamond particles translocate from the blood into liver, spleen, kidneys and lungs, and they were still detectable there even after 28 days. Approximately 60% of the administered particles were enriched in the liver. No excretion of the particles was observed, resulting in the requirement of further studies regarding long-term behaviour in the body .

In another mice study, nanodiamond was used as a carrier for chemotherapeutic agents. It was shown that both the side effects of chemotherapy and tumor growth could be reduced . Although similar in size (about 50 nm), the nanodiamonds used in this study were excreted within days from the bodies of mice .

Studies Outside of Organisms – in vitro

Currently there are no studies regarding the environmental exposure with diamond nanoparticles available.

No adverse effects were observed after ingestion of nanodiamond suspensions into the lungs of mice. Currently, no studies are available that deal with the uptake of diamond nanoparticles via  the skin or the gastrointestinal tract.

Uptake via the Lung - Inhalation

Removal of particles from the lungs by macrophages was observed. Overall, a low toxicity was assumed for the lung .

There have been few studies regarding the uptake and risk of environmental organisms. Here, the occurrence of toxic effects was strongly dependent on the type of surface modifications of the nanodiamond. There is currently no study dealing with long-term effects of diamond nanoparticles.

One study examined the influence of different surface modifications of nanodiamond particles on the embryonic development of frogs. The frog embryos were exposed to the particles and the development was followed in comparison to untreated embryos. Both the survival and the development of embryonic malformations was strongly dependent on the type of surface modification. The effect spectrum ranged from completely non-toxic (hydroxyl groups on the surface) to highly toxic (carboxyl groups on the surface). For a practical application of the particles thus a non-toxic variant could be selected .

The nematode C. elegans, which usually feeds on bacteria ingests diamond nanoparticles and enriches it in the gut. A transition from unmodified particles from the gut into the body tissue does not occur, however, dextran and albumin-coated particles are able to pass through the intestinal mucosa . Despite these differences in the absorption none of the particles used is toxic to the nematodes. Lifetime, number of offspring, ROS level as well as stress response does not differ from untreated control worms.

In contrast, nanodiamond influenced reproduction and survival in water fleas. First, it was found microscopically that the particles adhere to the exoskeleton of the animals and also accumulate in the intestines. The latter can lead to decreased absorption of nutrients, leading to increased mortality (from 12,5mg/l) and subsequently to a reduction in the reproductive rate (from 1,3mg/l) . An uptake of the particles from the intestine into the body's cells was not observed.

The uptake behaviour of diamond nanoparticles was investigated in various human cell lines.

Behaviour of uptake in somatic cells

A consistent uptake of particles of different sizes into the cells was confirmed using electron microscopy . The uptake of the particles takes place as an active process through endocytosis (see our article "basics - How do do innovative materials or nanomaterials behave once inside the body or the environment?"). The particles accumulate in certain cell organelles, presumably lysosomes .

Nanodiamonds have the capacity to be strongly fluorescent and have therefore been used in many studies as cell-penetrating "dyes" . Generally, nanodiamonds are rapidly absorbed (within minutes) by living cells .

Currently there are no studies regarding the environmental behaviour of diamond nanoparticles available.