For the fibres themselves and the polymer composites produced out of them, pre-investigations showed a partially strong tendency towards splintering at mechanical stress and mechanical processing. Up to now it is still unresolved how strong the potential is for releasing alveolar fragments within the entire life cycle of the fibres when stressed mechanically. 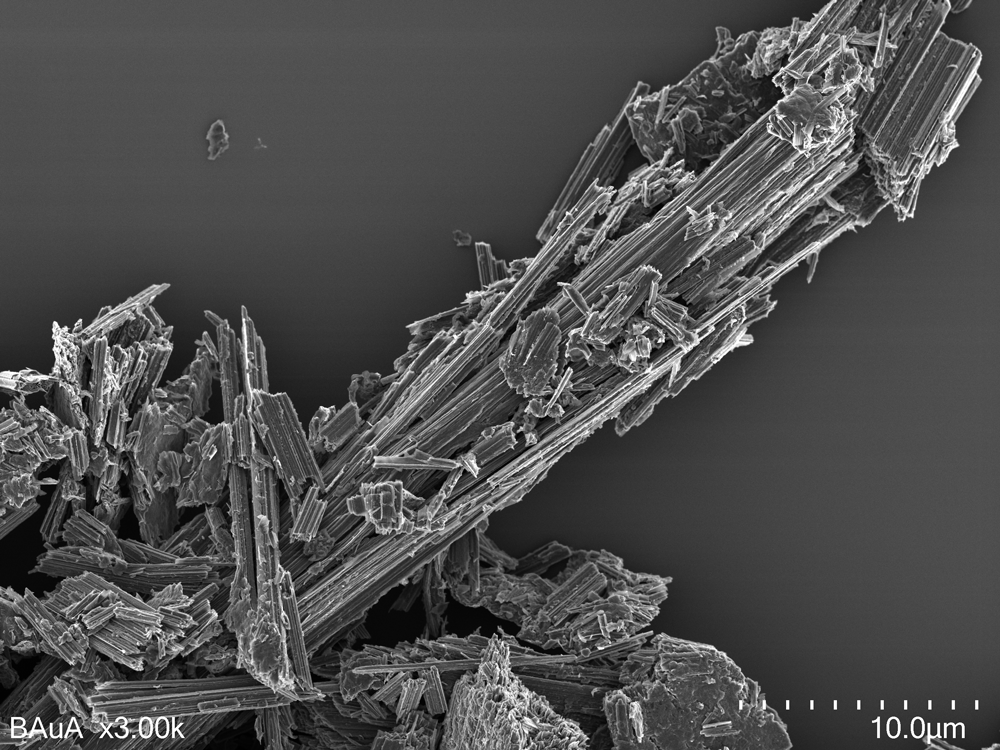 In the light of the asbestos problem, the development of material-related expertise on the fracture behaviour of carbon fibres varying in types and provenience is urgently needed. The material conditions of the fibres leading to the formation of alveolar fibrous fragments have to be examined. 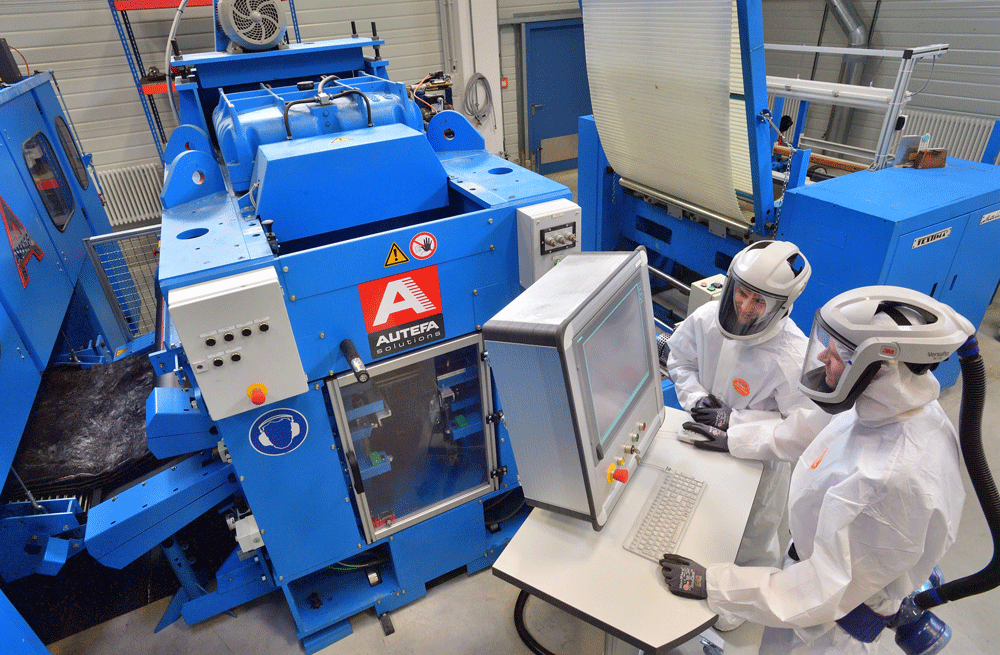 The increasing importance of carbon fibres especially for lightweight and high-performance applications requires a deeper insight in dust and fibre releasing processes due to the high persistence of graphitic raw materials in biological systems. Joint cross-sectoral efforts of different disciplines such as safety research, materials science and product development are needed.

Objective of the CarboBreak project is a deeper understanding of the splintering behaviour of carbon fibres as well as the investigation of the releasing processes of alveolar fragments from carbon fibres and fibre composites manufactured from carbon material at mechanical stress. Main output of the project will be recommendations concerning work procedures and personal safety as well as the definition of ideal respectively optimised process parameters. The results of CarboBreak provide fundamental contributions for the development of application-safe material innovations.

Nanotechnology is regarded as one of the most significant innovations of the 21st century, featuring a large industrial and medical potential. Already by now, nanomaterials are used in a variety of different products. Currently, commercialised nanomaterials comprise only a fraction of the chemical space. However, due to substance combinations as well as variations in size, shape and surface modification an almost unlimited number of nanomaterials is possible. Despite extensive research over the past two decades, it has not been possible to formulate any generalised conclusions on the potential health hazards of nanomaterials. Unlike for conventional bulk chemicals there are only very few nanomaterial grouping strategies available. In consequence, nanomaterials are usually still subject to experimental testing and risk evaluation on a case by case basis, which is very time- and cost intense.

NanoToxClass aims to facilitate the respective health hazard evaluation by developing new grouping approaches for a selection of industrially relevant nanomaterials. Importantly, the approach will integrate existing data from literature and the public domain together with extensive new data from a modern systems biology approach in combination with established toxicological endpoints. NanoToxClass will perform transcriptomics, metabolomics and proteomics studies in vitro as well as in vivo.

The project will thus make use of most comprehensive datasets, allowing to unravel mechanisms of action of nanomaterials and concomitantly develop new grouping strategies based on mode of action. Furthermore, our approach will significantly contribute to the establishment of in vitro / in vivo correlations and hence support the development of new integrated testing strategies. Moreover, selected nanomaterials will be examined not only in their original form but also at representative stages of their life cycle, i.e. after thermal aging or after release from a composite material. Finally, newly identified grouping criteria will be validated using additional nanomaterials.

To achieve these objectives, NanoToxClass combines expert knowledge from academia, federal authorities and industry. The development of nanomaterial grouping strategies is of high importance in Europe as well as internationally. 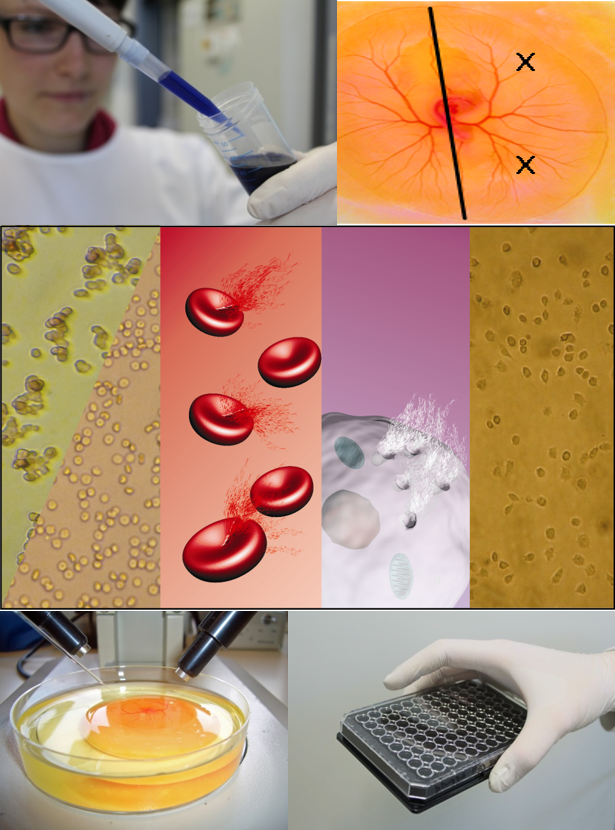 Nanotechnology is one of the key technologies of the 21st century that developed from a basic research to a worldwide important discipline in the last years with an enormous importance in life sciences and medicine. Magnetic nanoparticles play an important role in diagnostic imaging for prevention, therapeutic monitoring and therapy.

Whereas the toxicological effects of acute nanoparticle expositions were widely described in the last years, long-term risks depending on the structure of the nanomaterials and the disease state of the patients have not been systematically investigated.

NanoBEL contributes to the development and validation of new alternatives to animal-based methods (cell cultures, hen’s egg models) to be applied in an integrated safety assessment of the long-term administration of nanoparticles. In close collaboration with DaNa2.0, the systematic collection of the data in a data base accomplish the categorization of nanomaterials, the identification of relevant endpoints, and the risk management.

Nowadays many everyday products contain very small particles, the so-called nanoparticles (NP), which are smaller than 100 nm. For example nanoscale titanium dioxide is used in sun screen or nano silver in functional sportswear. 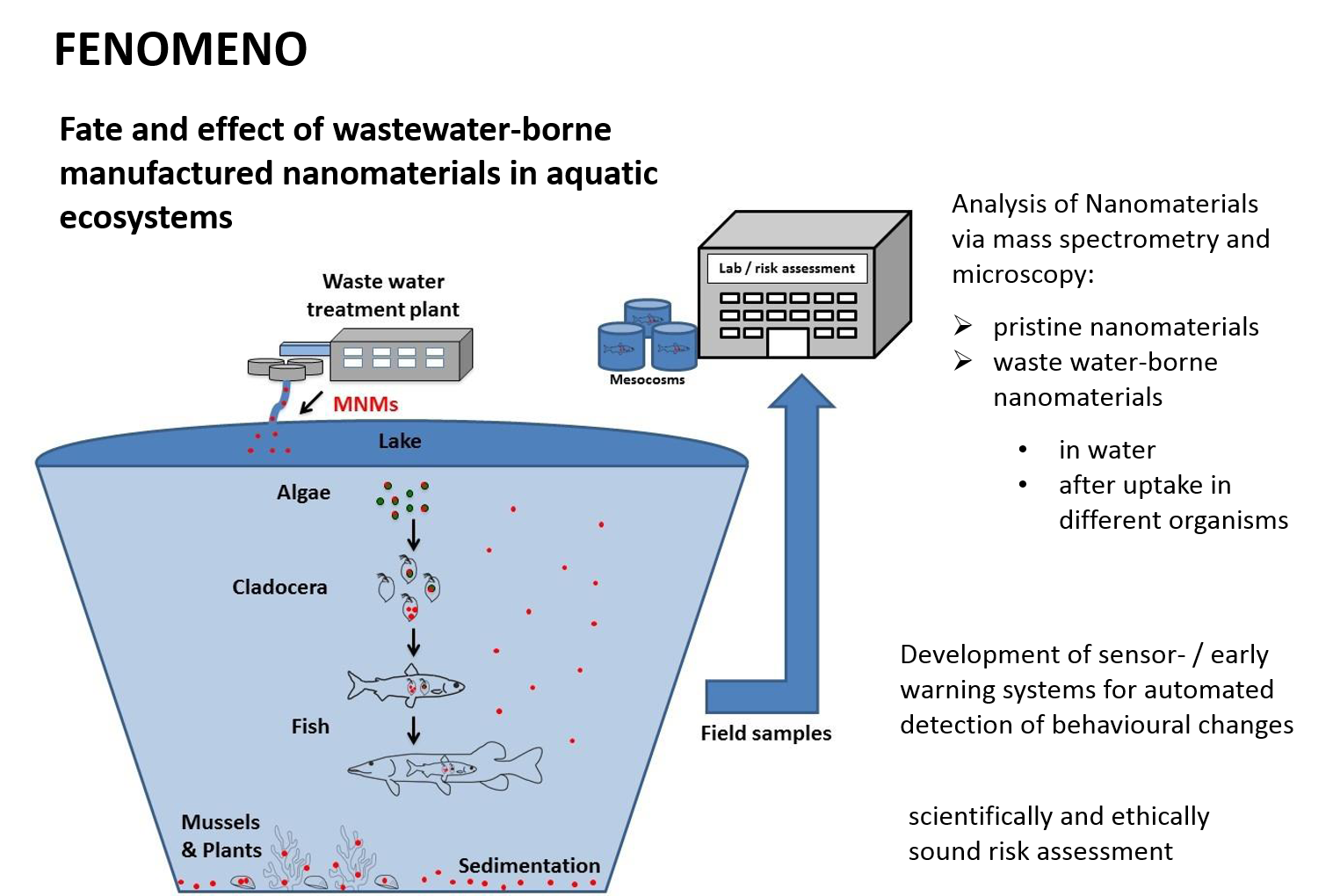 These nanoparticles are transported via our personal hygiene and laundry in our sewage treatment plants and from there into our waters. But what happens with these wastewater-borne nanoparticles in the water? Are they taken up by organisms and thus enter the food chain?

The FENOMENO project is going to answer these questions using two approaches: (1) tracking the route of silver nanoparticles and titanium dioxide nanoparticles in a natural food chain (algae – water fleas – juveniles – predatory fish) in Lake Mondsee in Austria and in parallel (2) analysing in detail the individual members of the food chain in the laboratory.

Water fleas (Daphnia) are key organisms in the aquatic food chain as they’re eating algae on the one hand and on the other hand are being food for young fish. By means of various test series the project is trying to determine the effects of these nanoparticles on the behaviour of the daphnia (movements, heart rate, etc.), on the reproductive success and other important criteria. All parameters are going to be investigated with short term and long term exposure of the daphnia to nanoparticles or nanoparticle exposed algae. 3D-tracking of cameras are going to be used to record the behavioural changes of daphnia providing a tool for an automated analysis and tracking of the Daphnias’ movements that later. Thus daphnia can be applied as biosensors or early warning system for nanoparticles in water. Uptake of nanoparticles and localisation within the daphnia will be investigated with the help of the different microscopic techniques.

In addition to invaluable methodology development and novel nanoecotoxicology data, FENOMENO will not only elucidate the fate and effect of waste water-borne nanoparticles in the aquatic food chain but at the same time contribute to provide the foundations for a consolidated framework to address risks of nanoparticles use and its management for humans and the environment

Based on the previous project CarbonBlack, the joint research project nanoCOLT investigated the interrelationships between material properties of manufactured carbon black nanoparticles (CBNP) and potential lung damaging effects in a low-dose range. A particular focus of the project nanoCOLT was to test first, if long-term CBNP-exposure of healthy lungs results in any histological and physiological alterations. Second, nanoCOLT aimed at testing if pre-damaged (diseased) lungs would respond more sensitive than healthy lungs to an exposure with carbon black nanoparticles. Further, the project sought to identify cell and tissue culture systems, which were suitable to predict potential effects of carbon black nanoparticles in humans. The results obtained from these in-vitro and ex-vivo test systems were finally verified in an in-vivo inhalation exposure experiment in rats according to OECD guideline 413.

Various in-vitro and ex-vivo test systems, partly established in the previous project CarbonBlack such as e.g., explant models of the murine trachea and of intra-pulmonary airways as well as human precision cut lung slices, were refined and novel test systems such as a particle-induced cell migration assay (PICMA) and an air-liquid-interface epithelial cell culture model were tested for their suitability as toxicity assays. In the in-vitro and ex-vivo systems, the carbon black nanoparticles to be tested were applied at concentrations of 1, 10 and 30 μg/ml, whereas in the in-vivo animal experiments a dose of 70 μg carbon black nanoparticles per animal were applied either once or seven times at an interval of two weeks.

Based on our studies in the ex-vivo and in-vivo animal models, our research network concludes that the tested tailor-made carbon black nanoparticles exhibited only a low degree of acute toxicity both in healthy lungs as well as in lungs pre-damaged by exposure to nitrogen dioxide (NO2) or experimentally induced allergic asthma. The low-level effects observed are particularly determined by their surface chemistry. Repetitive exposures as model of a long-term exposure also resulted in only low-level effects of the test carbon black nanoparticles in the ex-vivo and in-vivo animal experiments. The in-vivo inhalation exposure study was performed using Printex®90 as reference particle and acetylene soot and Printex®90 coated with benzo[a]pyren as test carbon black nanoparticles. The sub-chronic exposure acetylene soot induced a stronger inflammatory response in rats than exposure with Printex®90 or Printex®90 coated with benzo[a]pyren.

The ex-vivo studies in human precision-cut lung slices revealed that also in the human test system there was no direct cell-damaging effect of the test carbon black nanoparticles on healthy and diseased (pre-damaged) lungs. The carbon black nanoparticles rather induced initial inflammatory processes in healthy human tissues that are characteristic of physiologic reactions on noxae and which can be seen as protective mechanisms. Notably, no such inflammatory reactions to be seen as physiologic protective mechanisms were observed in tissues of diseased lungs (pulmonary fibrosis) exhibiting marked histopathologic alterations. The results obtained in the human ex-vivo test system are largely congruent with the findings from the ex-vivo and in-vivo animal experiments.

In summary, the joint research network nanoCOLT finally concludes that, on the basis of a variety of experiments using in-vitro, ex-vivo and in-vivo test system in mouse, rat and human cells and tissues, respectively, the acute and sub-chronic toxicity of the test carbon black nanoparticles in the low-dose range can be ranked as low and that the effects are primarily determined by the surface chemistry. Whether the absence of inflammatory reactions seen as physiologic protective mechanisms, which was observed in the human ex-vivo test system when using histopathological strongly altered tissues, will have a negative impact on the underlying lung disease during chronic exposure and increasing persistence of the carbon black nanoparticles in the lung, has to be addressed in future studies.