Pesticides or plant protection products are intended to protect plants from pests such as insects, microorganisms or vermin such as nematodes. The use of nanomaterials in this sector is based on a number of expected benefits, such as an increase in pesticide efficacy against pests which allows for the application of lower amounts of pesticides. However, such products are not currently on the market and are being researched extensively for their benefits and potential environmental risks. 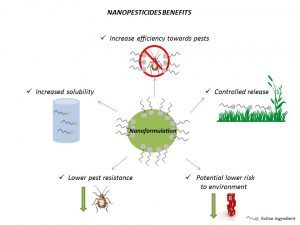 At present, there is no generally accepted definition of the term “nanopesticide” which is currently used differently in legislation, science, public and business.
One proposal is “A nanoparticide is a plant protection product that contains components in the nanometer size range (up to 1000 nm) and has new properties that are related to the small size of their components.” So, a size-based definition is not enough for nanopesticides, unlike other nanomaterials. Generally, pesticides always consist of several substances. Similar to a drug, the actual active ingredient is mixed with other accompanying compounds. Those allow the active ingredient to be easy to apply to the plant, to evenly distribute and to remain stable after use. In most of the proposed applications for nanopesticides, the nanomaterial itself is not the active agent, but acts as an auxillary compound to stabilize the active agent or enhance its controlled release (e.g. as a nanocapsule). Nano copper and nano silver are examples of nanomaterials as active agents.

There are many types of nanopesticides. The nanomaterial is usually used as a carrier for the actual active ingredient in emulsions, capsules, gels, fibers and particles. Nanoparticles can also act alone as nanopesticides (e.g. copper).

Risks of nanopesticides for the environment

Nanomaterials in nanopesticides are deliberately released into the environment due to the nature of their application. Therefore, benefits and risks to humans and the environment must be considered carefully. The EU Biocidal Products Regulation states that every manufacturer must prove that a pesticide is safe before admitting a product. Since 2013, nanomaterials have also been explicitly included in the regulation.
Despite the many ideas on how nanomaterials can be used to improve conventional pesticides, there are currently no nanopesticide products on the market. On the one hand, the development and approval of a pesticide is very tedious and expensive, on the other hand, it is currently unclear how great the savings by using a nanopesticide compared to a conventional pesticide really is.

Nanopesticides are a novel class of plant protection products that promise a number of benefits to agriculture. However, both benefits and potential risks to the environment are still poorly understood. Research in this area is very active and will provide answers in the future on their applicability, risks and economic acceptance.