How do nanomaterials get into wastewater?

What happens to nanomaterials in wastewater treatment plants? 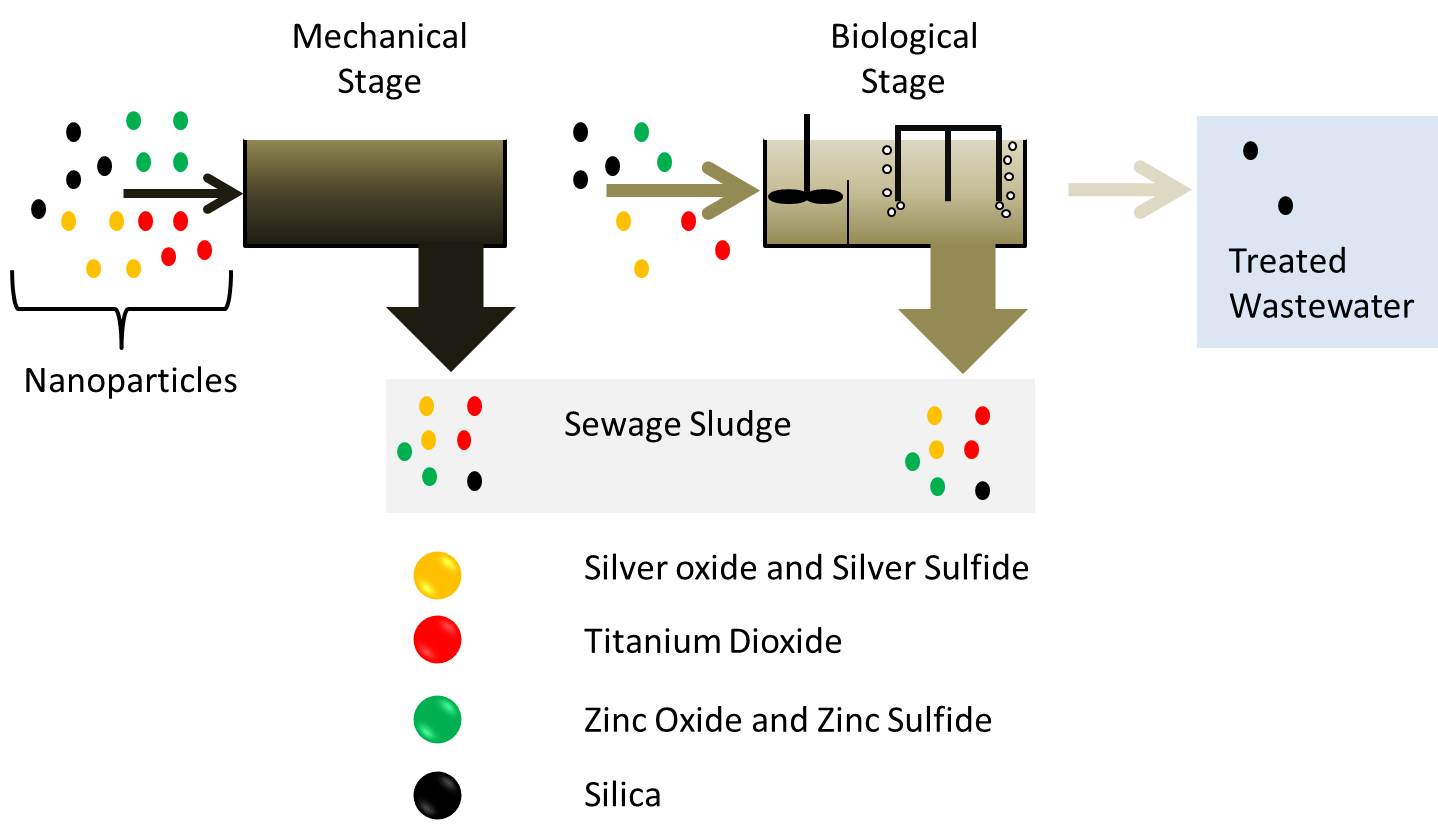 Based on the current knowledge, most of the investigated nanoparticles like nano silver, titanium dioxide or zinc oxide are removed by 90 to 95% from wastewater [2]. An exception are silica nanoparticles which are less efficiently removed due to their peculiar surface properties and which may therefore be present under certain conditions in treated wastewater [2]. The removed nanoparticles become part of the sewage sludge which is separately treated. Despite the very high removal rate of nanomaterials during wastewater treatment, computer-based simulation models show that treated wastewater is one of the main sources of nanomaterials to freshwaters [1]. In addition, we have to consider that untreated sewage can get into the environment. Reasons for this can be sewers that are not connected to a wastewater treatment plants or strong rain events. During such rain events, a part of the wastewater is discharged untreated into the environment to avoid an overload of the wastewater treatment plants. Measurements in rivers have shown that the discharge of untreated wastewater can indeed result in a temporary increase in the concentration of nanomaterials in the water [3]. 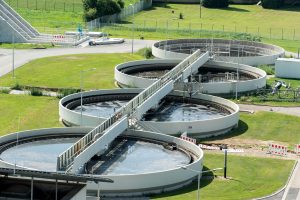 Sludge treatment in thickeners in the sewage treatment plant photographed from above © Werner – stock.adobe.com

The solids separated during wastewater treatment are collected as sewage sludge. This sludge consists mainly of biota, organic and inorganic compounds. Nanomaterials made of metals or metal-oxides such as silver or titanium dioxide are not biologically degradable and are enriched in sewage sludge [5,6]. In addition to the removal from wastewater, some of the often-used nanomaterials such as silver, zinc oxide and copper can undergo transformation reactions and form new minerals, for example with sulfur [4-8]. These nanomaterials are therefore not degraded but they lose by this transformation their original properties. In case of a combination with sulfur, the formed metal-sulfides are quite insoluble under environmental conditions and are much less toxic to environmental organisms than the original nanoparticles [9]. The further fate and the detailed ecotoxicological effects of the transformation products are part of ongoing investigations.

There are several options how sewage sludge can be disposed or further used. In accordance with country-specific regulations, sewage sludge is incinerated, landfilled or used as fertilizer in agriculture. In Germany the largest part of sewage sludge is currently incinerated, only a small fraction is used in agriculture or landscaping. During incineration of sewage sludge the nanomaterials remain in the ashes and are finally landfilled, while they are completely transferred to soils and therefore to the environment in the case of agricultural use. Computer-based simulation models have shown that sewage-sludge treated soils can reach over the years very high nanomaterial concentrations of several mg/kg [1]. Monitoring studies could confirm this prediction for titanium dioxide, silver and zinc oxide nanomaterials [10-12]. However, despite the increased burden of soils by long-lived metal compounds, only a small fraction of the metals present in sludge-treated soils can actually be attributed to nanomaterials [13, 14].

Influence of nanomaterials on the purification capacity of wastewater treatment plants