Tungsten carbide-cobalt (WC-Co) is a so-called hard metal which is characterised by an extraordinary hardness and wear resistance. Hard metals are mainly used in the production of tools for milling, drilling and pressing/punching processes. In addition surgical instruments are made of tungsten carbide-cobalt and the best-known product is the rotating balls used in ball point pens. 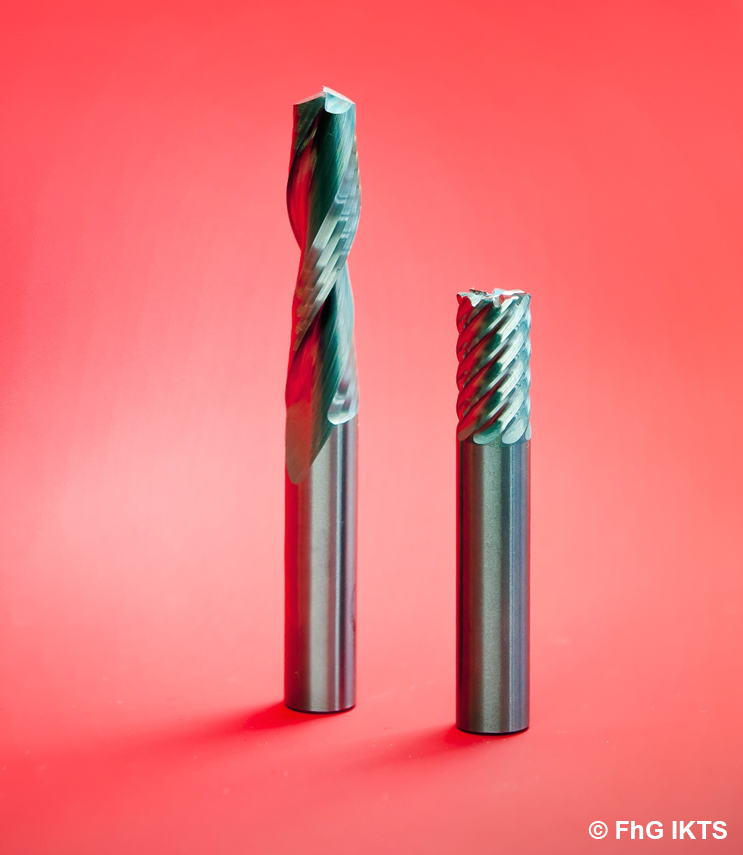 Tungsten carbide-cobalt is a toxic substance regardless of the size of the particles. The toxic effects are caused by the percentage of cobalt within the material. Tungsten carbide-cobalt is classified as probably carcinogenic and can cause a lung disease known as “Hard metal disease” in exposed workers. Nowadays this disease occurs only rarely since various protection measures and regulations have been put into place when handling this material at the workplace. Users are safe when handling finished workpieces containing tungsten carbide-cobalt nanoparticles since there is no particle release from these products. Modern factories producing this material are obliged to have filter facilities installed to prevent an environmental release of these materials. All waste products are collected and disposed of as hazardous waste.

In general, the human body as well as the environment are only exposed to very small amounts of tungsten carbide-cobalt nanoparticles. Therefore only a very low risk has been associated with this material. 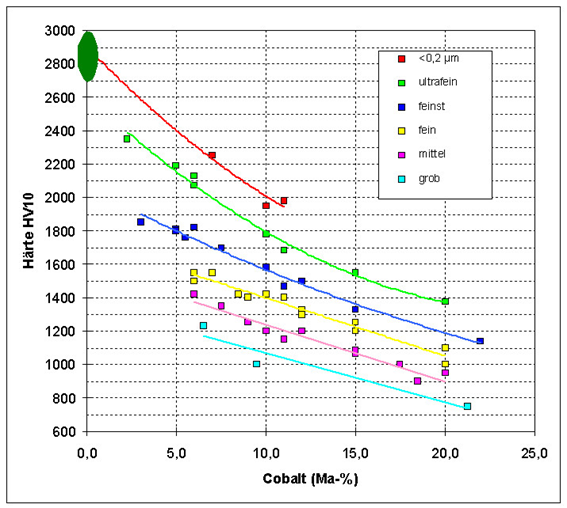 Important properties of tungsten carbide-cobalt are hardness, strength, high breaking and beating ductility as well as high electrical and thermal conductivity. By varying the metallic cobalt content and the tungsten carbide grain size, important properties of the alloy can be specifically adapted. By varying the cobalt content between 0 and 20 mass per cent, hard metals can cover a hardness range from tempered steel to super-hard alloys. The smaller the carbide grain the harder an object can penetrate the surface and the higher is its hardness.

Likewise, different technical wear-resistant parts like nozzles or reinforcements (e.g. for mills) are made of tungsten carbide-cobalt. Well-known products include hard metal driller or hard metal coated circular saw blades for hobby craftsmen as well as the small balls in ball pens.

For hard metal grain sizes below 1 µm, exceptional combinations of hardness and strength are achievable, which makes such alloys interesting for the production of hard materials and very fine tools.

In 1999, the working group "Hard metals" of the German industrial union for powder metallurgy suggested a classification of tungsten carbide-cobalt hard metals according to grain size, which is today accepted worldwide.

Tungsten carbide cobalt is not self-igniting. As a mixture with air (dust) under the influence of an ignition source, tungsten carbide is possibly flammable (dust explosion).

Hard metals such as tungsten carbide-cobalt are non-natural materials not occurring in nature. They are produced by mixing carbide and metal powders, a forming step and a thermal treatment (sintering).

Ground breaking for the development of hard metal industries was the work of the Osram Studiengesellschaft in Berlin and the patent filed in 1923 by Karl Schröter, which was bought by the Krupp company later on. As soon as 1926, Krupp introduced the first alloy under the name WIDIA to the market. WIDIA is short for “wie Diamant” (German for `diamond-like`) and refers to the extraordinary hardness of the material. Nowadays, large production facilities are located in China, the USA, Sweden, Israel, Luxembourg, Austria and Germany.

After usage and at the end of life cycle hard metals are being recycled to a large extent. In case of scrap containing tungsten carbide-cobalt it can be either fully processed and re-enter the hard metal production or used for the production of various steel alloys.

From epidemiologic studies on hard metal workers the so called “hard-metal-disease” is known, which is characterised by lung fibrosis, asthma and lung cancer . However, this disease pattern only occurs, when workers are exposed to tungsten carbide-cobalt, not to tungsten carbide or cobalt alone. If exposed to only one of the compounds, no lung diseases were observed. The “hard-metal-lung” is an approved occupational disease in Germany, which very rarely occurs due to extensive work protection measures.

Besides the occurrence of lung diseases, a possible link of tungsten carbide-cobalt exposure with an increased rate of childhood leukaemia in Fallon (Nevada, USA) has been discussed, since the temporal occurrence of the diseases coincided well with an increase in airborne tungsten and cobalt levels . However, this potential link has been controversially discussed and viruses as alterniative cause for the enhanced leukaemia rate have been suggested.

To minimise exposure, suitable protective clothes like gloves and masks should be worn. For the users of tools made of tungsten carbide-cobalt an exposure to the particles is unlikely, since the sintered tools are extraordinary hard and wear-resistant. Hence, new release of particles during usage of drillers or others tolls is not relevant.

A mixture of tungsten carbide and cobalt, tungsten carbide-cobalt particles, exhibit a higher toxicity than cobalt alone. Cobalt is a compound of known human toxicity and a daily dose of 20 mg and above may induce severe health problems. Hence, the International Agency for Research on Cancer (IARC) classified cobalt alone as "possibly carcinogenic" to humans and the combination of tungsten carbide and cobalt, tungsten carbide-cobalt, as "probably carcinogenic" to humans. An mechanism called "contact-corrosion" between cobalt and tungsten carbide is assumed as a reason for this enhanced toxicity, inducing the formation of free radicals in the presence of oxygen, which in turn may damage cells of the body (mostly lung cells) . Alternative or additionally, particles may act as a "trojan horse" and increase the availability of cobalt in the cells.

Studies Outside of Organisms

Many of the results described here on tungsten carbide-cobalt nanoparticles were obtained by the project INOS, a research project funded by the German Ministry of Education and Research (BMBF).

In in vitro assays, the enhanced toxicity of tungsten carbide-cobalt is marked by a decrease in metabolic activity of cells, damage of the cell membrane and in some studies also with DNA damage . In a study on various human cell lines originating from lung, liver, intestine and skin, nano-sized tungsten carbide-cobalt showed similar results, but cells differed in their sensitivity.

Which genes are influenced by tungsten carbide-cobalt particles was investigated on human skin cells. Such genes are able to unravel which functions of an organism may be influenced by particle uptake. The majority of influenced genes can be associated to cobalt exposure, and the observed effects were all known cobalt-effects; no new mechanisms of cobalt were found .

Tungsten carbide-cobalt (WC-Co) is a non-naturally occurring compound, which is technically produced from tungsten ores and by mixing of tungsten carbide powders with cobalt.

Until the 1950s, environmental protection was barely considered and tungsten carbide and cobalt were released to the environment via air or water during the production process. Today, a release of hard metal particles into the environment is strictly forbidden. Modern hard metal facilities are equipped with filter systems, which significantly reduce the release of airborne particles. The waste is collected and recycled or deposited as hazardous waste. Theoretically, tungsten carbide-cobalt particles might be released by accidents e.g. during powder transport. However, up to now such accidences have not been reported.

In the vicinity of Fallon (Nevada, USA) an enrichment of tungsten and cobalt in air and water as well as in lichen and wood has been detected . A hard metal facility in the town or a close by military base are discussed as potential source.

Tungsten carbide-cobalt particles can be inhaled. The extent to which they can be absorbed through intact skin has not yet been investigated. The particles can enter the body via food if hygiene is poor. Ingestion via contaminated drinking water is also possible.

Results obtained by in vitro assays indicate an uptake of nano-sized Tungsten carbide-cobalt particles into cultured lung cells, skin cells, and cells of the large intestine. Tungsten carbide-cobalt nanoparticles were never detected in the cell nuclei . Contamination is followed by an enhanced level of tungsten and cobalt in the blood and in the urine. Hence, exposure monitoring of hard metal workers (so-called biological screening) can be performed by measuring blood or urine concentrations.

Exposure to tungsten carbide-cobalt (WC-Co) nanoparticles mainly occurs occupationally and hence, there are only few investigations regarding effects on environmental organisms.

An accumulation of tungsten and cobalt in lichen and trees was observed, but there is no information on possible biological effects available from this study . Nevertheless, this illustrates a particle uptake by these organisms via air or water.

Cobalt alone is classified as hazardous for the environment and for aquatic organisms. Hence, there are strict regulations for the handling and application of cobalt to keep its bioavailability limited, e.g. discharge via the waste water is forbidden. These regulations also apply for tungsten carbide-cobalt.

An uptake of WC-Co nanoparticles into cells, but not in the nuclei of cells was demonstrated. Laboratory studies on the behaviour of particles in liquids indicated an agglomeration of nanoparticles into bigger assemblies, which may also occur in surface waters. Laboratory experiments demonstrated that tungsten carbide-cobalt toxicity is not prevented by agglomeration. Even though particle agglomerates are bigger then single particles they were taken up by the cells.

Tungsten carbide cobalt absorbed into the body can be detected in the blood and is excreted in the urine.

For hard metal particles investigations on micro-size particles have been conducted for comparison. According to investigations conducted up to now, the assumption of differing modes of actions of nanoparticles compared to micro-sized material due to their small size has not been confirmed. The comparison of the biological effects showed merely differences in the effect strength . Tungsten carbide cobalt particles are likewise toxic, but exposure is nearly exclusively occupational and can be avoided by suitable protection clothes.

Behaviour of Uptake in somatic cells

Micro-scale tungsten carbide cobalt particles were observed in macrophages and nano-scale particles in different vertebrate cell lines . To date, it is  not known which uptake mechanisms are exactly used by cells to incorporate tungsten carbide-cobalt nanoparticles.

To date, there are no data available regarding the environmental behaviour of tungsten carbide-cobalt (WC-Co) nanoparticles.