The placenta is an important tissue barrier that separates the unborn child from the mother. The foetus is totally dependent on proper functioning of the placenta during its development as it is fed and protected by the unique physiology and structural complexity of this organ. As nutrients and oxygen have to penetrate to the foetus, waste and carbon dioxide have to be transported in the other direction. Nanoparticles may cross this barrier and affect the unborn child. 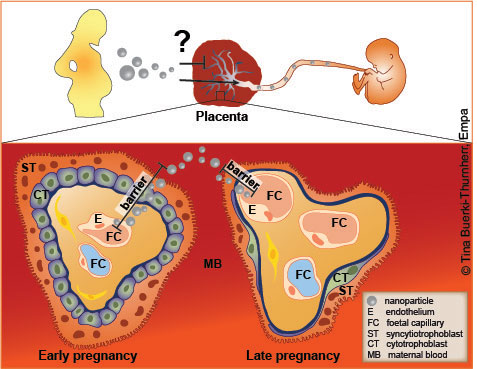 The placenta features a variety of functions ranging from transport, to endocrine and immunological support of the pregnancy. Despite the fact that the placenta presents a natural barrier for many substances, the discovery of birth defects caused by thalidomide in the 1950’s and 1960’s changed the belief that the placenta is an impenetrable barrier. Today, it is accepted that several environmental pollutants, alcohol, therapeutical and illegal drugs can cross the placenta. Thus, the increasing use of engineered nanomaterials raises concerns about the possibility of a maternal to foetal transport of nanoparticles and adverse effects on the embryo.
In recent years, some studies were conducted to understand if nanoparticles can pass the placental barrier and induce acute toxicity in the placental tissue and/or the developing foetus. However, such studies are rare and thus the knowledge on the placental transfer and effects of nanoparticles is still very limited. These investigations cannot be performed directly in pregnant women due to ethical concerns. Alternative approaches include the application of pregnant animals (mostly mice), in vitro cell culture and the ex vivo model using human term placenta.

Exposure of pregnant mice to different nanoparticles induced pregnancy complications or damage to the foetus (e.g. to titanium dioxide, silicon dioxide, carbon nanotubes) [1-7], but not by others (e.g. gold nanoparticles) [8, 9]. Interestingly, the negative effects on the foetus may not only be caused by the nanoparticles themselves, as damage has been described in the absence of nanoparticle transfer across the placenta. Although these studies provide first information about the distribution and behaviour of different types of nanoparticles in a pregnant organism, extrapolation of these results to humans is questionable since the placenta has a very unique anatomy and physiology in different species.

Currently, the perfusion of human placentas directly obtained after caesarean section presents the ‘gold standard’ for human transplacental transfer studies. First results using this method showed that the transport of particles is dependent on size, material composition and surface modification [10-13]. In addition, they depicted a higher foetal-to-maternal transport of nanoparticles than vice versa indicating the participation of an active, energy-dependent transport mechanism [14]. Besides the great advantages of this ex vivo model major problems are the low throughput and the short perfusion time.

In contrast to the ex vivo placental perfusion system, in vitro cell culture studies fulfil the need for a high-throughput approach to test a much larger variety of differently modified nanoparticles. They are less predictable for the in vivo situation, but these studies enable a first evaluation of the nanoparticles. Among many other cell types the BeWo cells are the most frequently used cell type. They originate from a human tumour tissue and demonstrate the maternal side in the model. For transport studies, BeWo cells are cultured on a porous membrane in a two chamber device, where substances can be added to the upper chamber and the transfer can be monitored in the lower compartment over time. Studies using this BeWo transwell model resulted in a transfer of e.g. polystyrene, silica and iron oxide particles [13, 15-17].

However, not only nanosafety issues are addressed by scientists, but there are high expectations that nanomaterials could be used to develop novel nanomedical therapies. The number of pregnant women depending on medical treatment during pregnancy is very high, and the use of medicines with known risks is commonly reported [18]. Nanomedicine may provide novel therapeutic approaches to specifically treat the pregnant women, foetal diseases or placental complications by identification of nanoparticles with reduced or enhanced placental transfer or accumulation in the placental tissue. Therefore, it is of great importance to not only understand uptake mechanisms and translocation of nanoparticles at the human placenta, but also to investigate if such processes can be steered by controlling the physico-chemical properties or surface functionalization of nanoparticles.