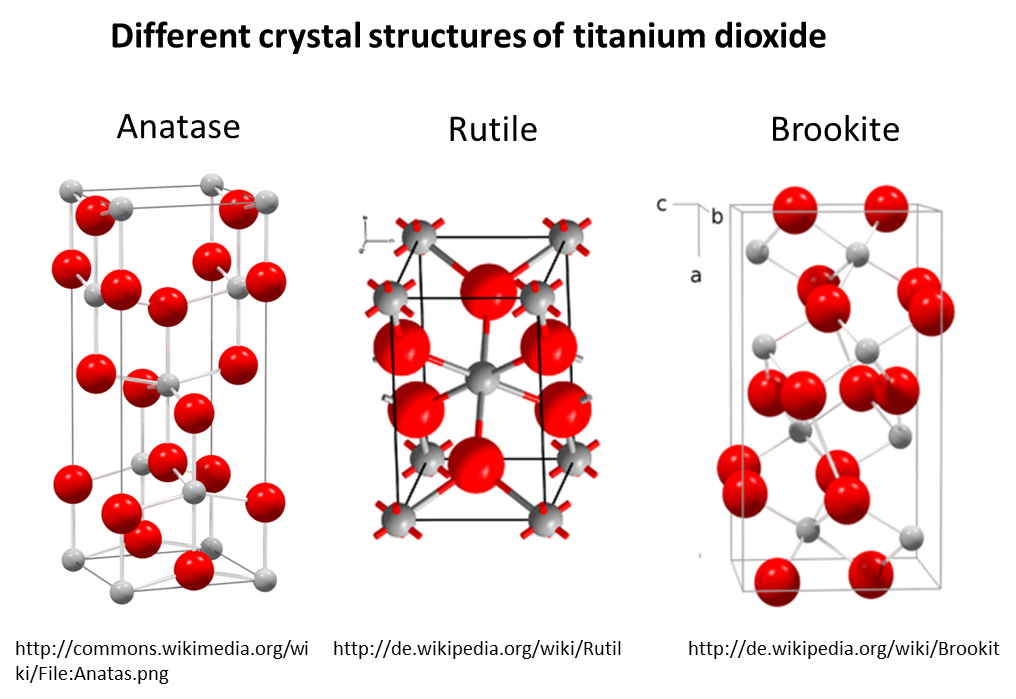 Example of different crystal structures of the same material. Titanium dioxide occurs in the different forms anatase, rutile or brookit.

An example for such a material is titanium dioxide (TiO2). To sun screen or as white pigment in paints it is mainly added in the rutile form, whereas for photocatalytic applications (such as self-cleaning surfaces) predominantly the anatase form is used.

In addition to titanium dioxide a number of other nanomaterials come in different crystal structures, e.g. iron oxide, silicon dioxide or carbon. The latter can occur in the form of diamond or graphite (a stack of multiple graphene layers). Because of its hardness, diamond is used for example for cutting concrete, whereas graphite is used a lubricant due to the good deformability of its crystal lattice. Consequently, the varying material properties of different crystal structures open a broad spectrum of applications.

The various crystal structures of nanomaterials have to be taken into account when analyzing potential adverse effects on organisms or the environmental behavior. The physico-chemical properties of the materials are known to differ depending on crystal structure.

As was demonstrated for titanium dioxide, the anatase and rutile modifications differ in their toxic effects on organisms and cells [1-3]. Anatase shows a toxic effect on cells [3] and organisms [1,2], while rutile was found to be non-toxic. On the one hand, the photocatalytic effect of the anatase titanium dioxide, which contributes to the formation of reactive oxygen species (ROS) is discussed as potential reason. On the other hand, it is known that the rutile form is poorly soluble in water. Therefore, it is believed that the rutile titanium dioxide may agglomerate and subsequently sediment in aqueous test media, and hence organisms and cells are exposed to particles only for short periods [1]. Likewise, such influences of the crystal structure on the toxic effects have been described for other nanomaterials.

Additionally, the different crystal structures can influence other nanomaterial properties such as solubility or sorption of other substances.

In summary, the crystal structure is an important property of nanomaterials, which can influence the behavior of the materials, and thus also modulate potential toxic effects.